Chamomile is probably the most ancient medicinal herb, and it was well-known to Greeks, Romans, and Egyptians, who dedicated this fantastic plant to Ra, their sun god. Its name comes from the Greek word ‘Chamaimelon’ meaning ‘the earth-apple’ because the scent of this flower resembles an apple. There are two popular types of this plant – Roman chamomile and German Chamomile.

You can use these white daisy-like plants to make tea and many other natural products. Both types contain anti-oxidants and essential oils, helping people to feel relaxed. It is an excellent remedy helping in a case of fever, inflammation, rheumatic pain, gastrointestinal disorders, menstrual disorders, muscle spasm, insomnia, and many other issues. 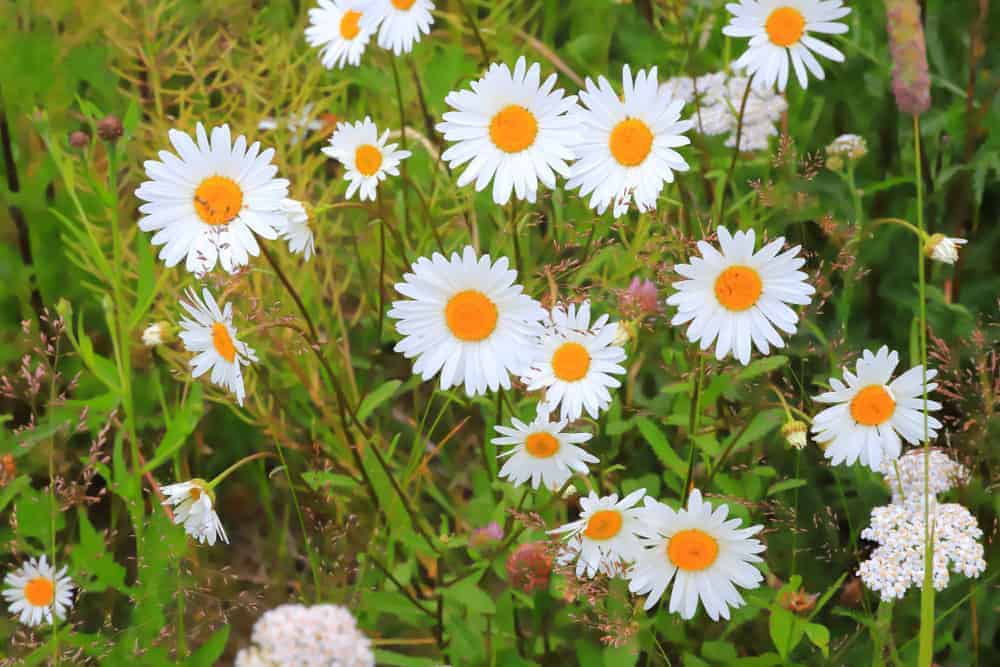 There are two most popular varieties of this beautiful, useful flower – Roman and German Chamomile.

A German botanist, who spotted this flower while visiting Rome, gave it the name after that city in the 16th century. However, its common nickname is ‘the plant’s physician’ because of a bunch of positive effects on plants growing nearby.

It doesn’t bloom abundantly, but its daisy-like flowers, with a tiny papery bract between the florets, are highly aromatic. I like gentle grey-green leaves, which surround them.

Since it stands up foot traffic and mowing, gardeners often use this small, fragrant, white flower with a yellow center to organize lovely ground cover.

Also, they add it into herb gardens and rock gardens or plant it in a container to beautify their homes. In England, gardeners use that plant to fill cracks between pavers.

I prefer growing my Chamomile as a line along a walkway, but you can also let it tumble over a garden wall. The best thing is that you can expect this plant to come back for years from its rhizomes. That’s it!

German Chamomile (Matricaria recutita, Matricaria chamomilla) is an annual plant growing up to 24 inches (61 cm) high. The Latin name of this flower originated in southern Europe and western Asia means ‘water of youth.’

Ancient Egyptians, Greeks, and Romans used this herb as a remedy to alleviate symptoms of fever, as well as inflammation, insomnia, rheumatic and gastrointestinal pain, and muscle spasm. Also, dried flowers and the foliage are excellent for making a relaxing tea.

I like delicate, white, daisy-like blooms of this wildflower with a yellow, hollow cone in the center and lovely fragrant leaves. Even though it is convenient for growing everywhere, avoid planting this plant in a container.

Since it blooms abundantly and needs just a few weeks to begin growing again after harvesting, you can collect it a few times during the growing season.

Moreover, if you plant it in a vegetable garden, you will get an organic repellent against cucumber beetles. Even though it is an annual, you can see your Chamomile the next season if leaving the last crop to go to seed.

How to Plant Chamomile in Your Garden 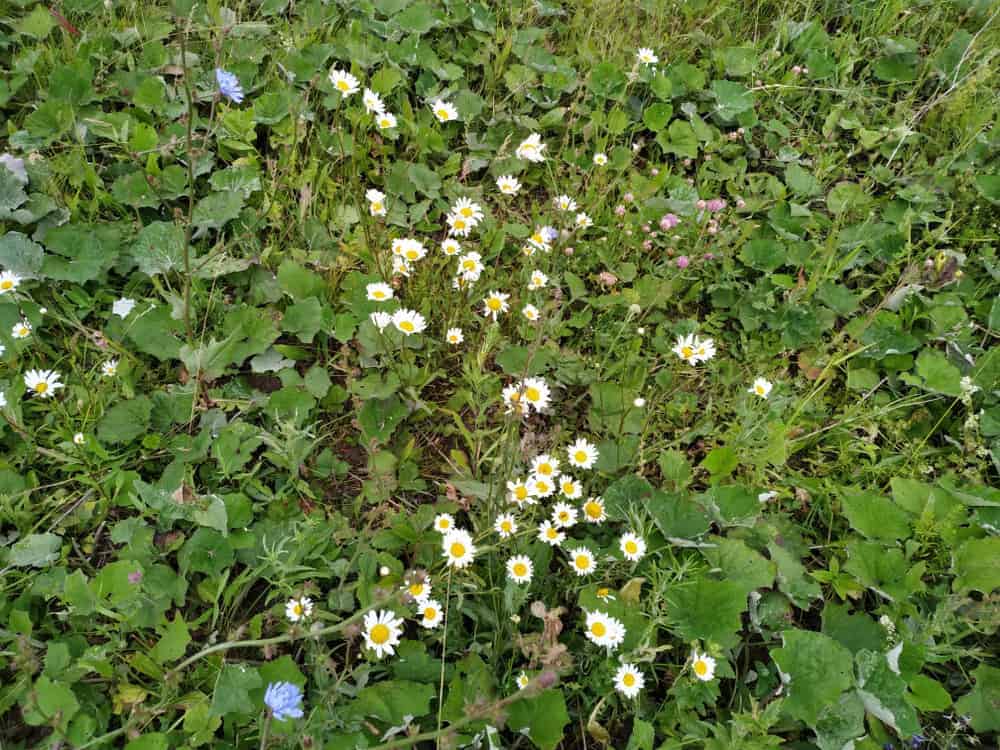 Since it is a self-sowing plant, you should sow these seeds only once. After that, just let the last crop mature, and it will do the whole job.

This variety needs the well-drained and fertile ground to thrive. Once planting this perennial, you can let it spreading by rhizomes the next year.

Find a sunny spot in your garden for your Chamomile. Remove rocks, weeds, and large clumps, and prepare the ground with a garden rake at least 12 inches (30.5 cm) deep.

Start sowing seeds in late spring or the beginning of summer after the last frost. Sprinkle handfuls of seeds on the surface of the ground and gently cover them with a light, 0.25 inches (6 mm) thick layer of soil.

Since seeds need a lot of water, keep the soil moist until your flowers germinate. If you water them daily and the temperatures are from 45 to 55 F (7 – 13 C), you can expect to see first seedlings approximately 7 to 14 days later.

After your seedlings are 2 inches (5 cm) tall and get at least two pairs of leaves, you should thin them 8 to 12 inches (20 – 30.5 cm) apart by removing the smallest and weakest plants. If you want to create a Chamomile lawn, you should space plants 4 inches (10 cm) apart.

The best period for sowing your Chamomile indoors is approximately six to seven weeks before the last frost in your region. To get the best results, you need to choose a pot filled with the starting mix.

Since seeds need light to germinate, just sprinkle them over the surface and press firmly 0.25 inches (6 mm) deep. Keep the ground moist and put a pot in an appropriate place when the temperature is at least 70 F (21 C). You will see the first seeds within 7 to 14 days.

Once your seedlings appear, it is the time to move them to a sunny windowsill. The second option is to keep them under fluorescent lighting, 3 to 4 inches (7.6 – 10 cm) away, approximately 16 hours a day. Avoid incandescent because they can be too hot for this purpose.

After a month, you can enrich the starting mix with a water-soluble houseplant food. If you notice that the pot you have chosen is too small, you can transplant seedlings in the new one, at least 4 inches (10 cm) in diameter before moving them in the garden.

After danger of frost passes, you should re-plant young plants in the nice, sunny place in your garden. They need to be established and with at least two sets of true leaves. Some gardeners prefer keeping seedlings sheltered after moving them outdoors to let delicate new plants become acclimated.

Use a quality digging shovel and make the holes big enough for tender roots of your seedlings. However, take care not to leave too much space for them because Chamomile may develop deep roots instead of stems and the foliage. Consequently, you will get much less flowering than you expected.

After positioning the top of the root ball into the ground level, fill the holes with the loose soil. Don’t forget to water seedlings well, which will help roots to connect with the ground appropriately.

How to Care Chamomile in Your Garden 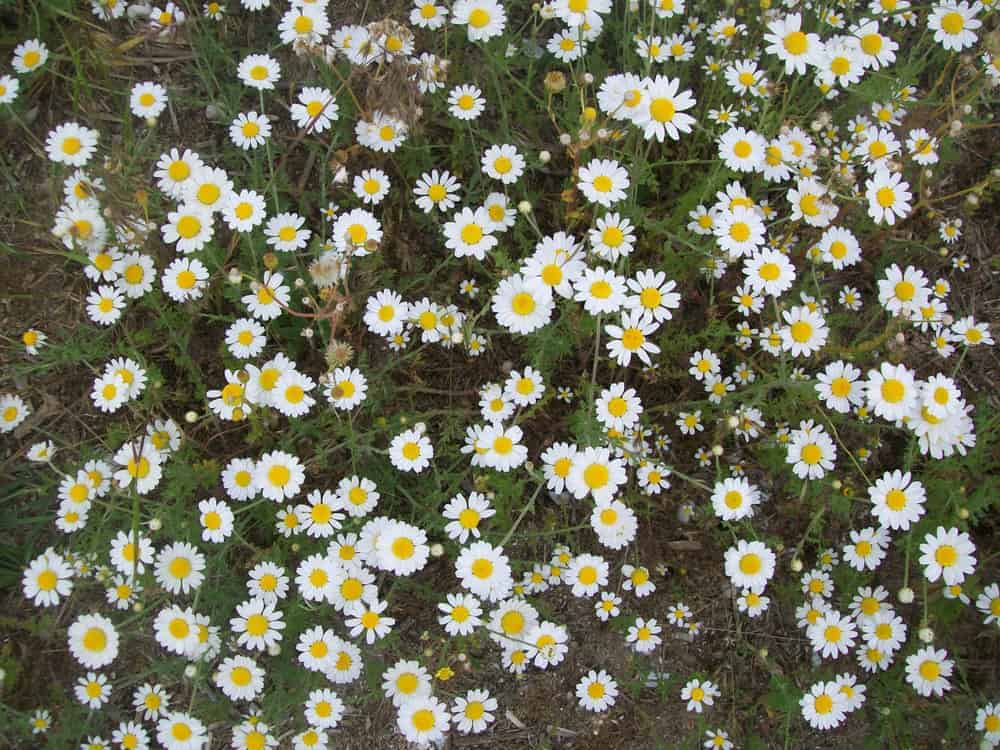 When you start planting Chamomile, provide at least 6 inches (15 cm) between plants because they need appropriate airflow to grow healthy and vigorous.

Both types of Chamomile will flower best if you grow it in ordinary garden soil with a neutral pH range from 5.6 to 7.5. Keep in mind that growing this plant in the poorer ground is possible, but you may get a floppy stems.

Chamomile will thrive in any weather, except when the summer temperatures are higher than 100 F (38 C).

Chamomile doesn’t need too frequent watering once established. You will help your plant if you leave the ground to dry out between two watering.

Use overhead sprinklers to water that flower regularly during the extremely hot period in summer. On average, it requires approximately 1 inch (2.5 cm) of water a week throughout the growing season.

On the other hand, you should water young Chamomile daily until the first flowers appear. Take care to keep the soil moist, but never soggy.

Avoid adding fertilizer around your Chamomile because this plant doesn’t need excessive feeding. In fact, in some regions, it is considered an invasive weed.

Covering Chamomile with organic mulch, evergreen boughs, shredded leaves, or aged bark in winter is an excellent way to protect it from low temperatures and severe winds.

At the same time, you will help in retaining moisture in the ground and prevent the growth of weeds in spring. However, keep mulch far away from stems to prevent their rot.

I can’t emphasize enough the importance of weeding when you decide to grow Chamomile, especially if you plan to use it for making tea. It is crucial to prevent weeds from stealing the necessary nutrients and water from your flowers. 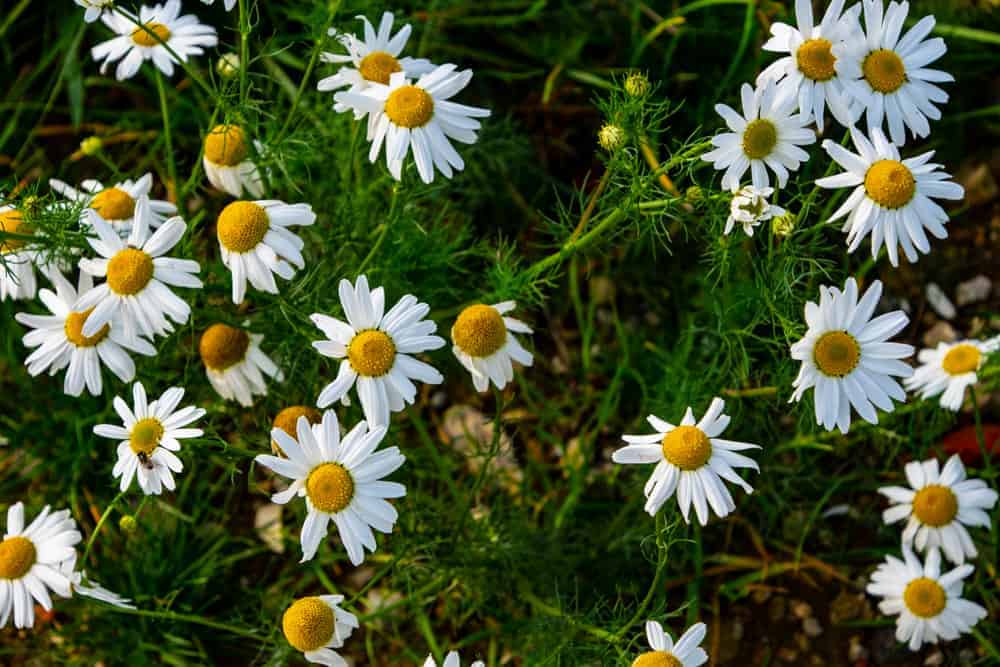 Unfortunately, Chamomile attracts pests like any other flower. However, appropriate watering can reduce the likelihood of disease.

The most probable reason why your plant won’t bloom is the absence of enough sunlight. Too much shade during the day will affect negatively to Chamomile.

The second reason is excessive feeding, especially applying fertilizer with a high amount of nitrogen. The best thing you can do to this plant is low caring throughout the season of growing and blooming.

It is the most common problem with seedlings. They start growing and look healthy in the beginning. Suddenly, they may wilt and eventually die without apparent reason.

In fact, the cause is a fungus appearing when the level of moisture is high while the temperatures of the soil are above 68 F (20 C).

Prevent this condition by avoiding abundant feeding, especially with a fertilizer high in nitrogen. Also, avoid overwatering and overcrowding. Your seedlings will thrive when you provide proper air circulation and modest moisture.

Once fungi appear, they will cause rotting of stems and older leaves of your flower. At the very beginning, you will notice water-soaked spots on the stems as well as brownish marks and fuzzy gray fungi full of spores on the foliage.

Remove infected flowers and burn them to avoid spreading the disease. Provide better air circulation for your plants and use pea gravel for mulching to decrease humidity.

A lot of diseases may cause rotting the roots and stems of your Chamomile. You will see the occurrence of yellow leaves, drying of leaf tips, and brown stems. Prevent this condition by proper drainage and cure your plants with adequate fungicide.

These sucking insects feed on the undersides of the foliage and leave sticky residues, which attracts ant. Get rid of these bugs by introducing their natural predators such as lady beetles and wasps into the garden.

As soon as you notice them, you should use a spray bottle and wash them off the foliage with insecticidal soap.

These insects form cottony-like masses on plants’ stems and leaves. Since they feed on the juices from the foliage, you will get weak growth of your flowers. Solve the problem by washing infected parts of plants. If it doesn’t work, use an appropriate pesticide.