If you’re looking for a plant for a shady spot, ivy is a great choice. This vigorous climber can quickly cover an unsightly wall or fence. And it looks great trailing from hanging baskets and containers too.

If you’re searching for the right variety for your garden design, you’ve come to the right place. We’ve found 12 types of ivy plants to fire your imagination. And we’re going to give you all the information you need on their characteristics and preferred conditions.

So if you’re ready, let’s find out more! 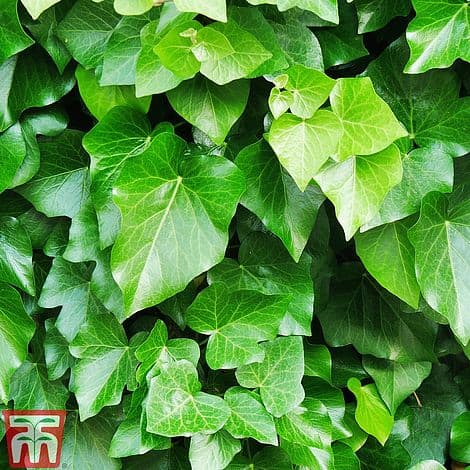 This beautiful glossy-leaved ivy is somewhat unusual in that it doesn’t climb. Instead, it forms dense clumps with masses of green-white flowers which appear in late summer.

Those flowers are very attractive to bees and other pollinators. That makes it a good way of attracting lots of beneficial insects into your garden.

Come the Fall, and the flowers turn into glossy dark berries, adding further interest. And because ivies are evergreen, you’ll get those lovely green leaves throughout the year.

This variety prefers moist soil, but will handle a wide range of conditions. And it’s a great groundcover plant for a difficult and shady area. It works particularly well as part of a woodland planting scheme.

It grows to a maximum height of about 40 inches, with the same maximum spread.

The shape of the leaf changes as it grows. New leaves have between three and five lobes, while more mature specimens are shaped like diamonds.

The combination of the colors and interesting shapes make this a striking plant in any location. Train it up a fence or wall, use it to add interest to a cointainer, or allow it to spread for groundcover. It can grow up to 4 feet tall with a width of up to 3 feet.

It can handle everything from full sun to full shade. It will even cope with drought, but you’ll get the best foliage if the soil stays moist.

It will appreciate shelter from drying winds. And watch out for infestation from aphids, vine weevils and scale insects. Take semi-hardwood cuttings in the summer to propagate new plants. 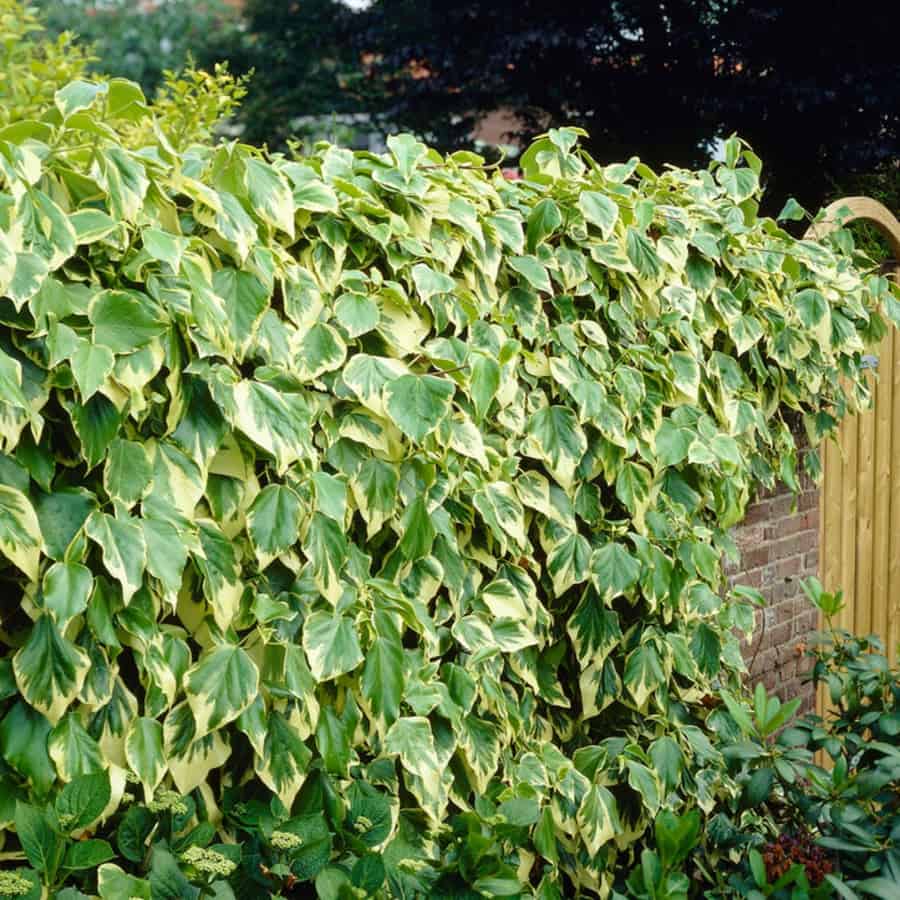 It’s a vigorous climber that can also provide ground cover. And plants can grow to an ultimate height and spread of between 12 and 26 feet. So if you have a large building you want to prettify, this is a great choice. And you can prune it as much as you want without causing any lasting damage.

It’s a hardy plant too, able to cope even with tough winters. It will handle any type of soil and light level. It can be planted out between late April and early October. But it does like to be kept in moist soil if at all possible. This is one case where a plant’s Latin name gives you more information than its common name. Because Swedish ivy doesn’t come from Sweden, or indeed anywhere in Scandinavia. As its Latin name suggests, it’s actually a native of Australia.

And although it’s known as ivy, it doesn’t belong to the Hedera genus at all. And it doesn’t climb, instead having a relatively upright habit. It’s most commonly used as a houseplant. One sits on the mantel of the Oval Office, a gift presented to John F. Kennedy and still going strong today.

It has aromatic green leaves with purple centers. It grows to a maximum height of about a foot, with a maximum spread of two feet. And it has a tendency to trail, which adds to its impact as a houseplant.

As the longevity of the Oval Office specimen shows, in the right conditions, it’s a robust little thing. Just try to keep it out of direct sunlight.

If you’re in an area that doesn’t get frost, it can also be grown outdoors. It works equally well as a groundcover plant, or trailing down a wall. 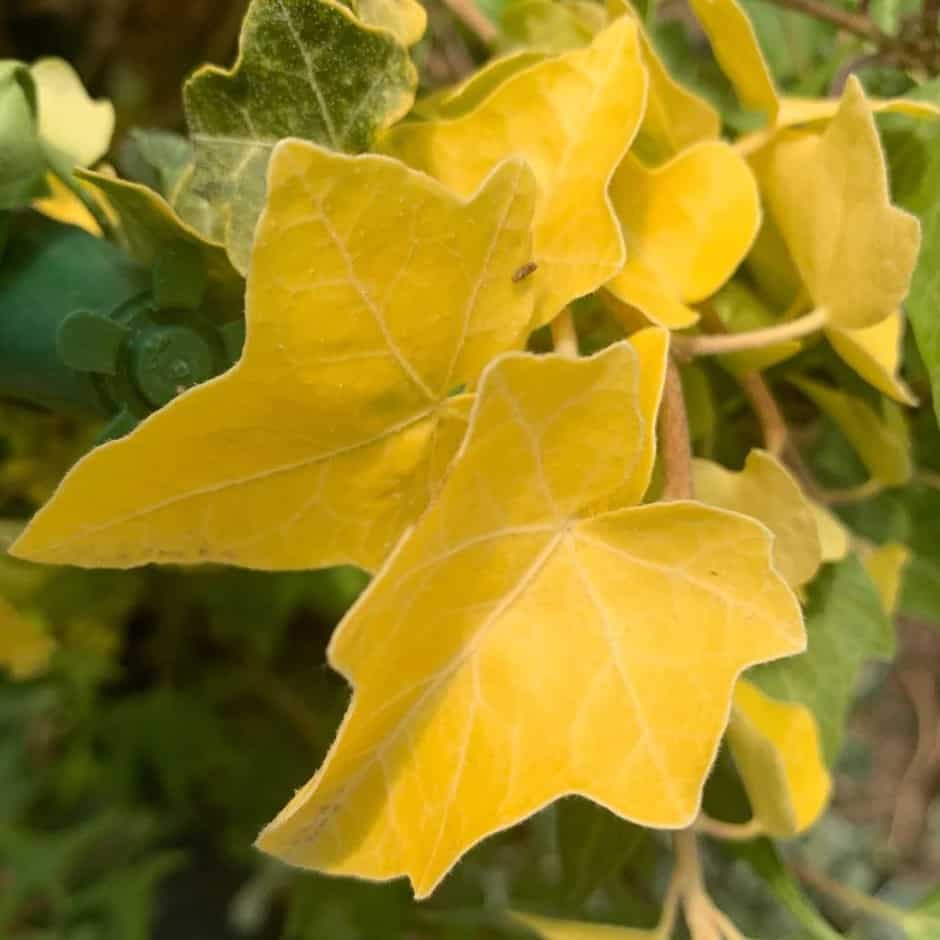 If you’re looking for a classic ivy with a colorful twist, the “Buttercup” variety of Hedera helix could be perfect.

This plant has all the traditional ivy attributes. It grows to great heights, clambering over any upright surface. It has striking five-lobed leaves. And it will give you the bonus of both flowers and fruits.

Those flowers are greenish-yellow and they appear in Fall, shortly followed by round, black berries. The leaves can vary in color from pale green to the bright buttercup yellow that gives this ivy its name.

It likes humus-rich soil, ideally alkaline, and plenty of moisture while it’s growing. It will handle either full sun or partial shade. But if you place it somewhere with plenty of sunlight, you’ll be rewarded with the most brilliant foliage.

It grows quickly, with a maximum height and spread of about 8 feet. 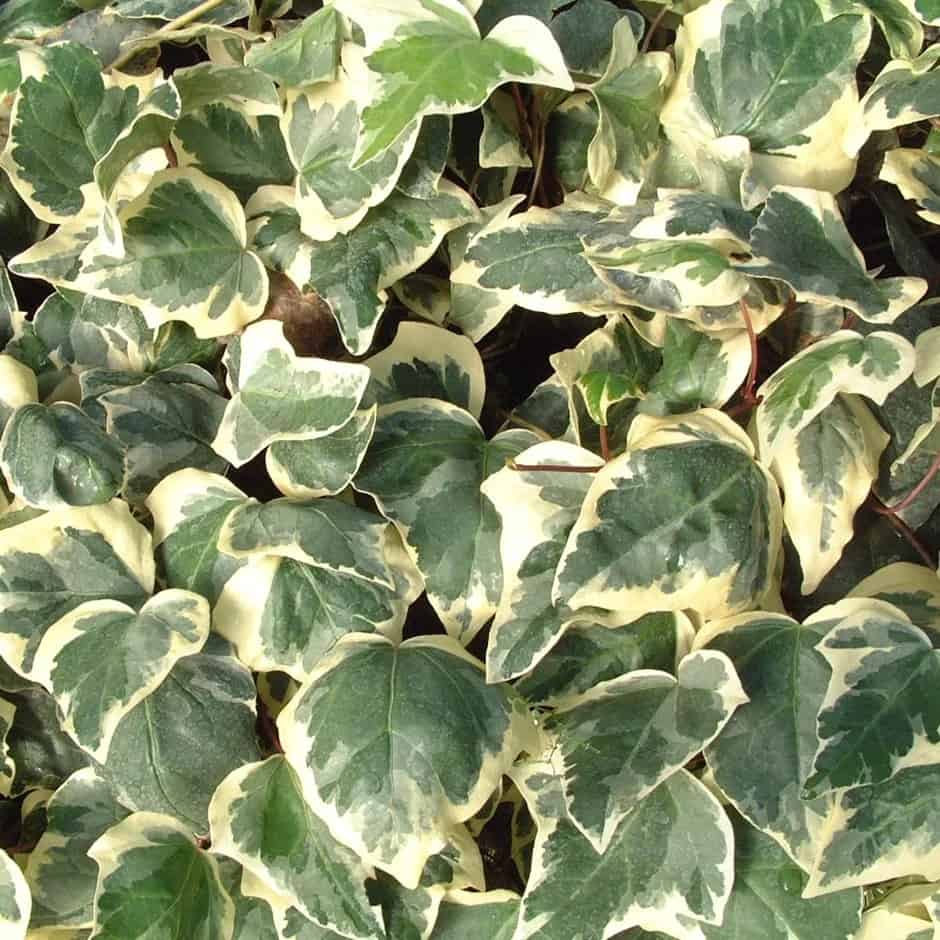 It has three-lobed leaves that shade from silvery-gray in the middle to creamy white at the edges. It can be grown both indoors and outdoors, and it’s a great option for brightening up a gloomier spot.

It’s vigorous and, like all ivy, evergreen, so it will provide interest throughout the year. It’s best planted somewhere with shelter from the wind. And it likes a fertile, moist and well-drained soil, preferably alkaline.

It’s a fast grower, and can reach a lofty height of up to 20 feet, with a spread of about 16 feet. But it will happily cope with being pruned at any time of year if you need to keep it in check.

Note that it’s harmful if eaten by humans or pets. But it’s great for attracting pollinating insects into your garden. 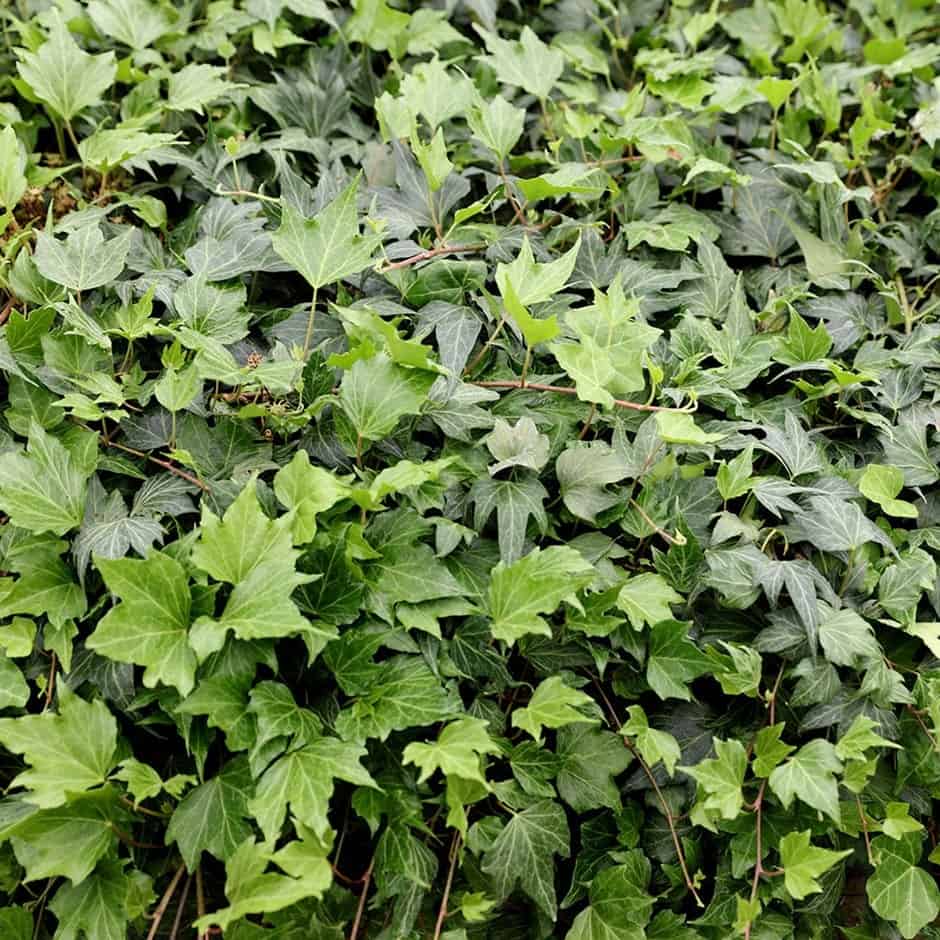 This attractive, glossy-leaved ivy is a great option if you don’t have a huge space to fill. It grows rapidly, but has a maximum height of about 3 feet, and a maximum spread of about 2 feet.

It both climbs and trails, so it will cover unsightly walls or provide groundcover where other plants struggle. And although it’s recommended for the usual “full sun or partial shade”, it will cope with lower levels of light too.

The leaves are small and dark green, with a wider central lobe and a smaller one on either side. It’s fully hardy, and will handle most aspects and soil types. Its preference, though, is moist and well-drained soil, rich in organic matter, and ideally alkaline. It likes plenty of water while it’s growing too.

It’s a resilient plant, fully hardy to frost. And you can prune it at any time of the year.

The leaves are poisonous if eaten, and they can act as a skin irritant. But bees and other pollinators love this ivy. 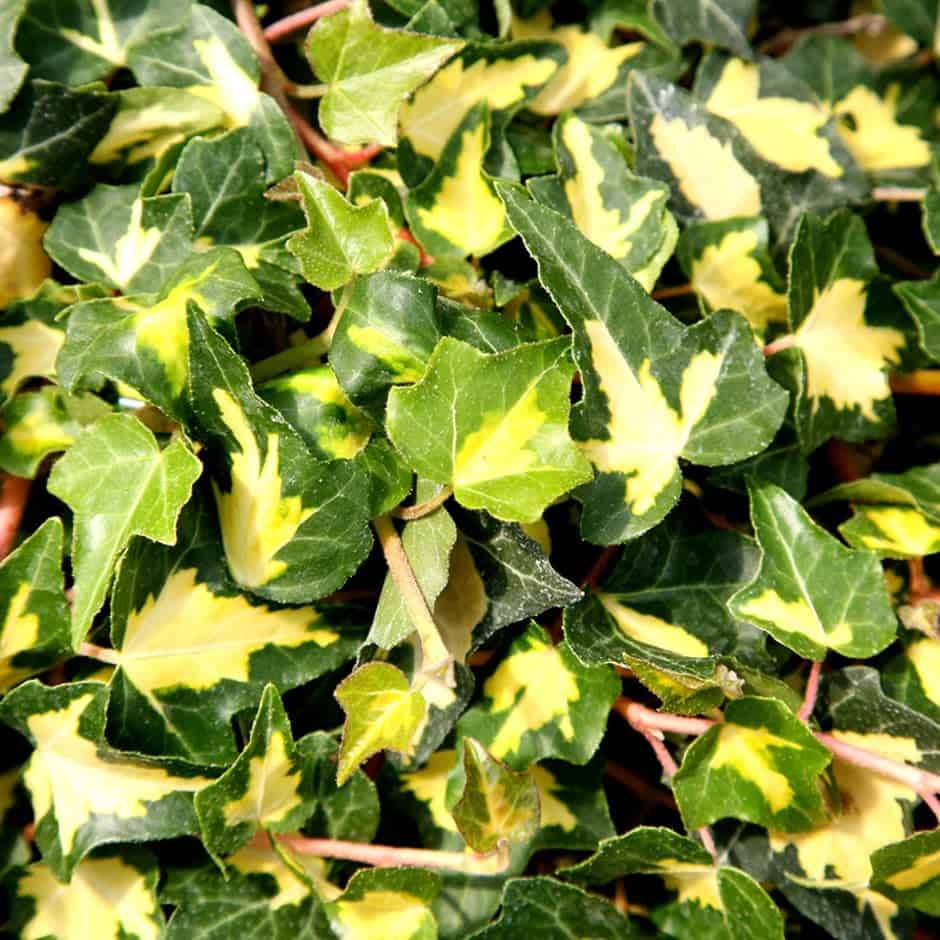 The common name of the Hedera variety “Oro de Bogliasco” is “Hedera Goldheart”. And that gives you a pretty good clue to the appearance of this striking plant.

Its glossy leaves have three or five lobes, and they’re dark green with a golden center. They make a great show against a wall or fence, where the plant will climb vigorously without needing support.

The leaves are accompanied by yellowish-green flowers from October to November. The flowers are followed by round black berries, which are toxic to humans and pets. But birds love them, and the flowers are a great draw for pollinating insects too.

This ivy will grow well in either sunny or shady spots, and in most types of soil. Keep it watered regularly while it’s growing, but don’t be afraid to prune if needed – you won’t do it any harm.

It’s a great option if you have a large area to cover. It can attain a maximum height of about 26 feet, and can spread up to 16 feet across. 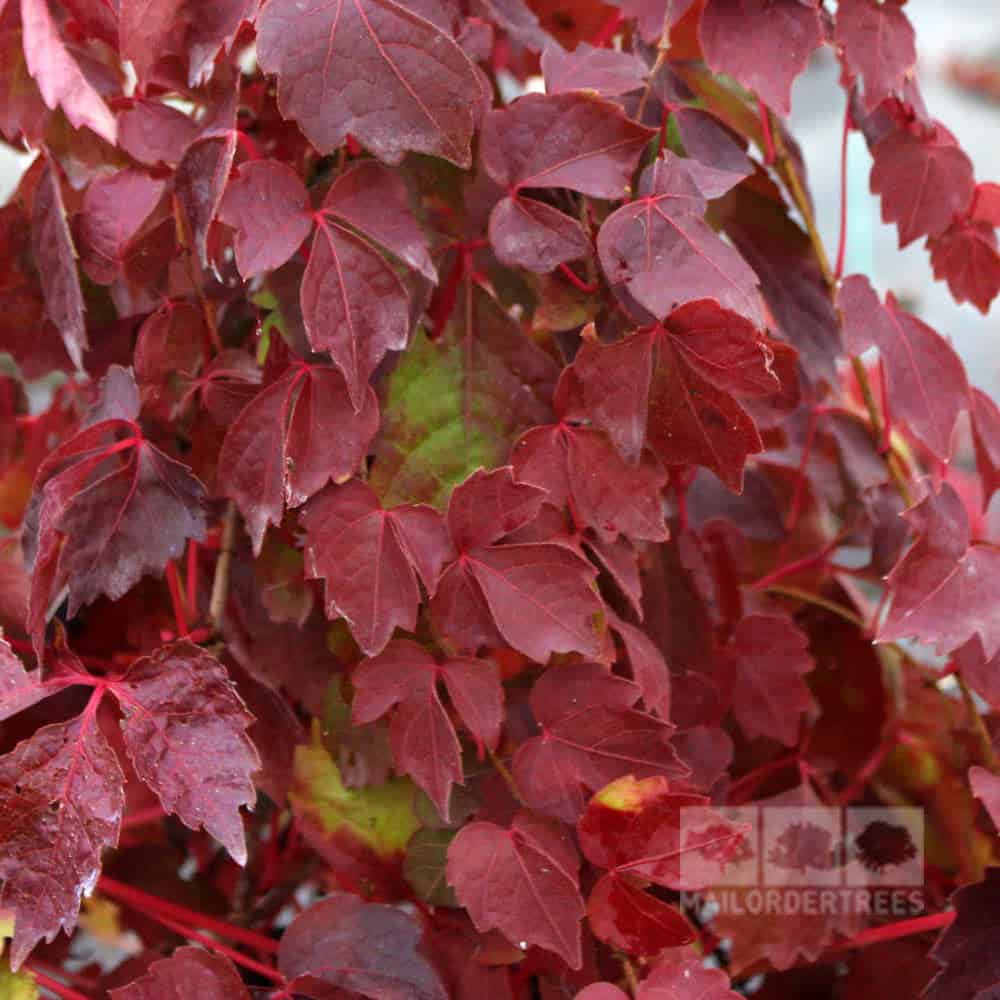 This lovely climbing plant might be called “Boston ivy” (or sometimes “Japanese ivy”), but strictly speaking, it isn’t an ivy at all. For a start, it’s deciduous – in other words, it loses its leaves in winter. But it does have lots of other features in common with true ivies.

To start with, it’s a very able climber. It will scramble up pretty much any vertical surface without requiring trellis or other support. The leaves are similar too, usually with three lobes. And there are small green flowers in July and August, which are followed by blue or black berries.

There are many different varieties on the market, and they include some with very striking coloring. “Vetchii”, for example, has leaves that turn bright crimson and deep purple in the autumn.

It’s a versatile plant, that will cope with any soil conditions, light levels or aspect. It’s impervious to frost too.

It’s best pruned over the summer or in early winter. And while it doesn’t usually have many problems with pests, watch out for the vine weevil or glasshouse red spider mites. 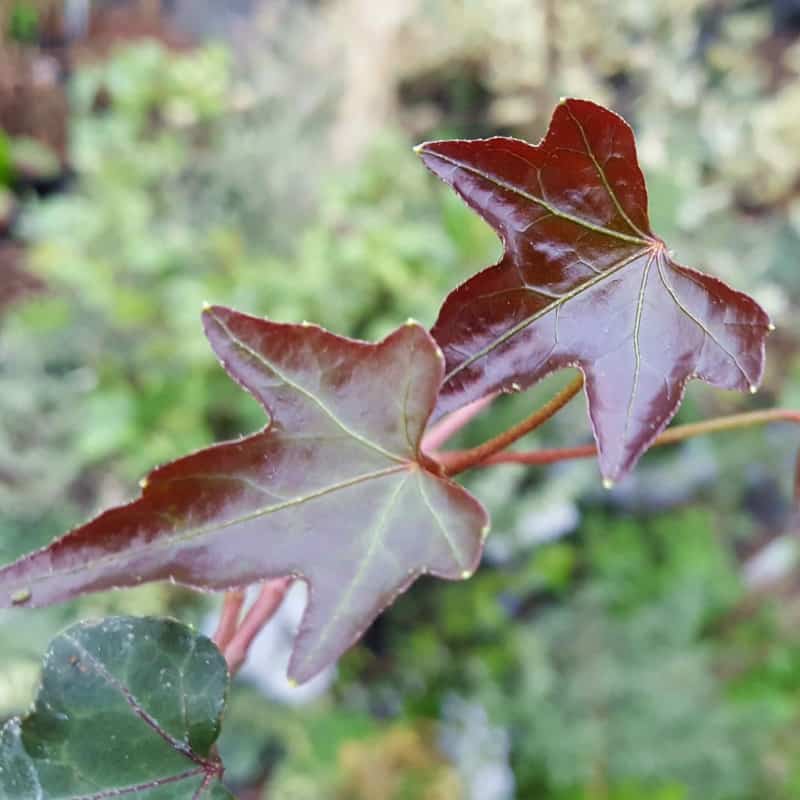 Also known as Himalayan ivy and Nepal ivy, the leaves of Hedera nepalensis have an unusual characteristic. Young growth has a distinctive red shade which turn to a soft green as the leaves mature.

It’s an evergreen, so it will look good throughout the year. And, as with so many Hedera, it’s not fussy about its situation. It does well in partial and full shade, and in most types of soil, as long as they’re reasonably moist. And it does like some protection from the wind.

It’s fully hardy and can be pruned whenever needed. It will grow to a maximum height of between 6 and 8 feet.

This unusual ivy comes from the Troodos Mountains of Cyprus.

It has mature leaves which are rather different to most ivies, tapered rather than lobed – rather like an arrowhead. The mid-green shade contrasts with attractive silvery veins and red stems. And it also has globes of pretty, pale green flowers.

It grows best in a well-drained soil in the shade, and prefers not to get too dry. Give it those conditions, and it will happily grow to a height of 6 to 8 feet, or higher, without requiring any support. If there’s no vertical surface for it to clamber up, it will provide groundcover instead.

It’s fully hardy, and will cope with being pruned at pretty much any time of the year. 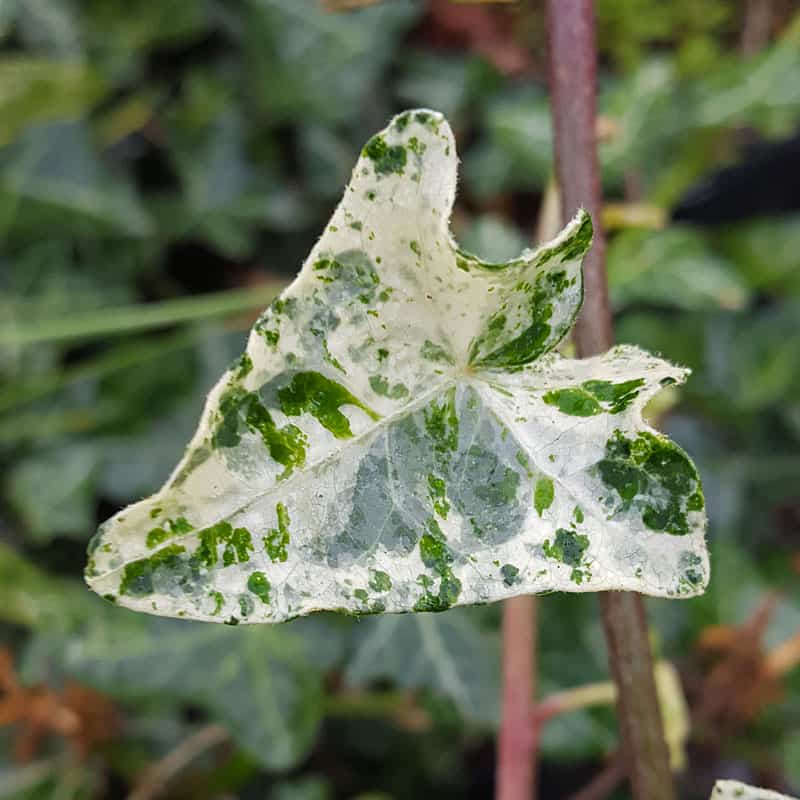 This is another unusual, and very attractive, variety of ivy.

When leaves first appear they are bright white, becoming gradually speckled with green as they mature. They look rather as if they’ve been spattered with green paint. That light and dark mixture gives it the alternative name of “salt and pepper ivy”.

It works equally well as a climbing plant or as groundcover. And those beautiful leaves will stay throughout the year.

But it’s shorter and less vigorous than many other varieties. It will grow to its maximum height of about 5 feet over the course of five to ten years.

It likes chalk or loam soil best, but it’s not fussy about light or acidity levels. And it can be pruned as and when required without causing it any problems.

That brings us to the end of our look at 12 types of ivy plants. From the classic Hedera helix varieties through to ivy-like plants like the Boston ivy, they have lots to offer gardeners.

They’re a great way to brighten up a dark space. And the beautiful shapes and colors of their leaves will add interest to any garden throughout the year.

They’re also a great choice if you don’t have time for intensive maintenance. Most varieties will cope happily with benign neglect, and will be equally forgiving of any-season pruning.

Good luck with choosing the right ivy for your garden.

Thank you for the beautiful pictures and so much info about each variety!! I really like the many other plants you discuss. Can the ivies that like shade live in the house? Do ivies trail or do they need to climb? Do they adhere to was? Thanks for your help! Karen