Flowers come in all shapes and sizes. But when it comes to colors, there’s one shade that’s hard to find: black.

But if you think there’s no such thing as black blossoms, think again! We’re searched out 11 plants with black flowers. And we’re going to find out more about these unusual specimens.

Ready? Step this way to begin our tour … 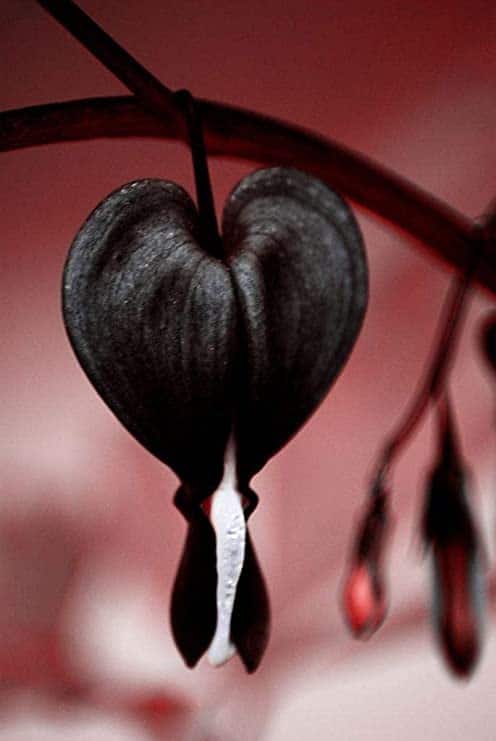 Bleeding Heart, or Dicentra, are one of the most popular and distinctive garden flowers. The reason for their name is obvious when you look at their heart-shaped blooms, with what look like two droplets hanging from the bottom.

Bleeding Heart blooms are usually red or white. But it is possible to find cultivars that produce almost black flowers. Look closely at Dicentra spectabilis, and you’ll see that the flowers are actually very dark purple, with a slender sliver of white.

The blooms are held in a row on graceful, arching branches. They make a striking addition to any garden.

Bleeding Hearts will do well in partial shade. They cope better with lower light levels than many other flowering plants, and too much sunshine will cause the flowers to wilt prematurely. In the right spot, they have a long flowering period over the whole summer. 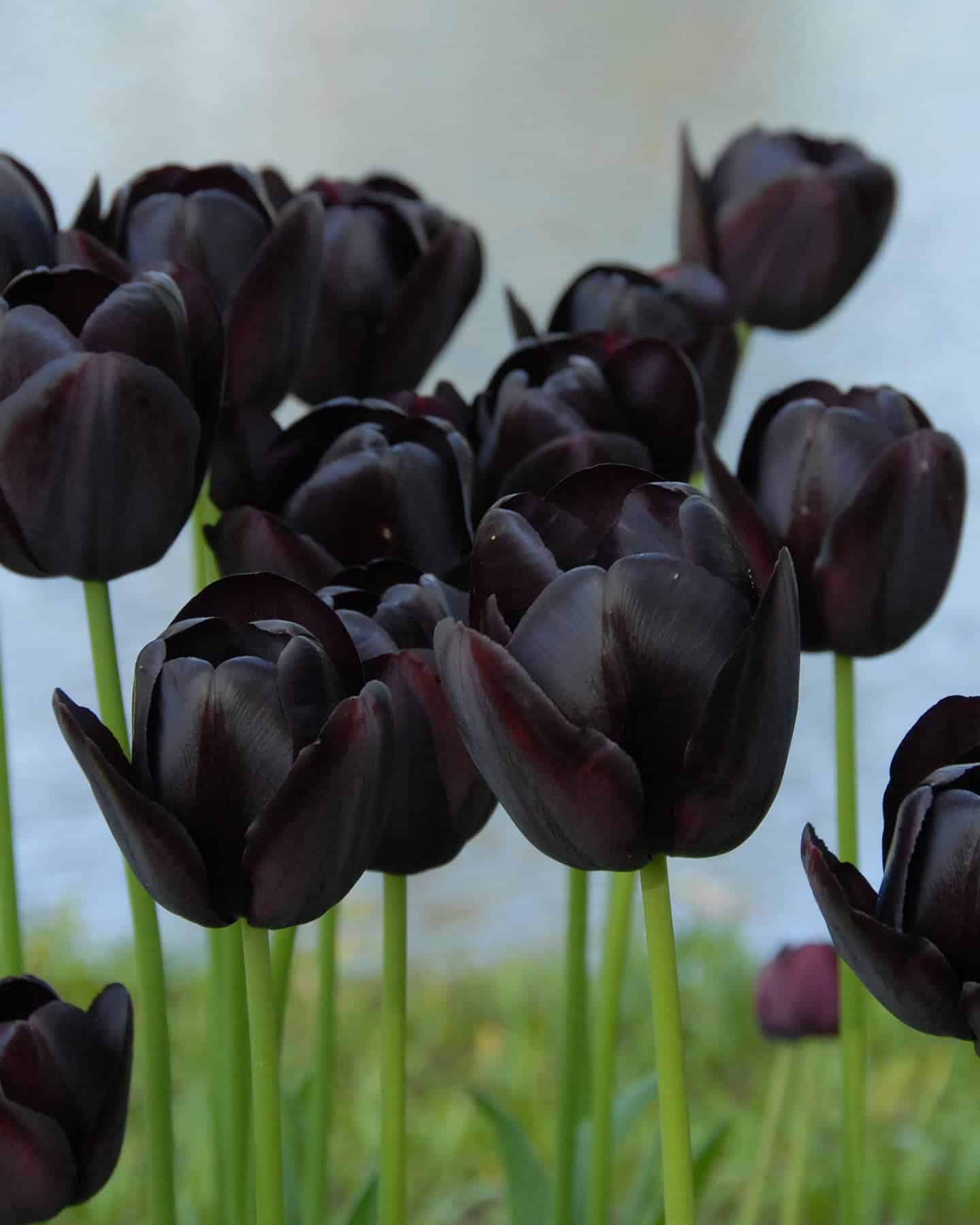 A carpet of tulips is a glorious sight in springtime. And there are few more spectacular varieties than Queen of Night, Tulipa liliaceae.

This gorgeous bloom is a deep purple color that’s almost black. And the large, glossy petals look just like velvet.

They’re planted as bulbs in the Fall, and bloom between April and May. Each plant will grow up to two feet tall, with a spread of about 6 inches.

They like plenty of sun, and in the Northern hemisphere will do well in a south or west-facing border. They can be grown in pots too, although they’ll need plenty of watering.

They prefer light, sandy and well-drained soil. And they’re hardy enough to cope with Spring frosts without wilting.

Once they’ve flowered, you’ll give bulbs the best chance the following year by keeping them watered and removing dead flowers. That will stop the plant wasting energy by developing unwanted seed pods. 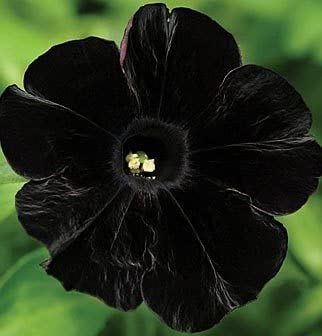 The Black Velvet Petunia, Petunia “Balpevac” is another flower that’s truly dark purple. But you’ll have to look very closely indeed to distinguish it from black.

Like all petunias, it’s easy to grow. And it will reward you with abundant blooms right through the summer and into the Fall. It’s a great plant for containers and hanging baskets, but will be just as happy in the front of a flower bed.

It likes full sun. That means if you’re in the northern hemisphere, a south or west-facing position is ideal. It will do best in well-drained soil, with shelter from the wind. And it isn’t hardy, so don’t plant it out until the frosts have passed.

And watch out for slugs and snails, which can leave whole plants sucked dry. If you’re planting them in containers, some copper tape around the bottom of the pots will help keep molluscs at bay. 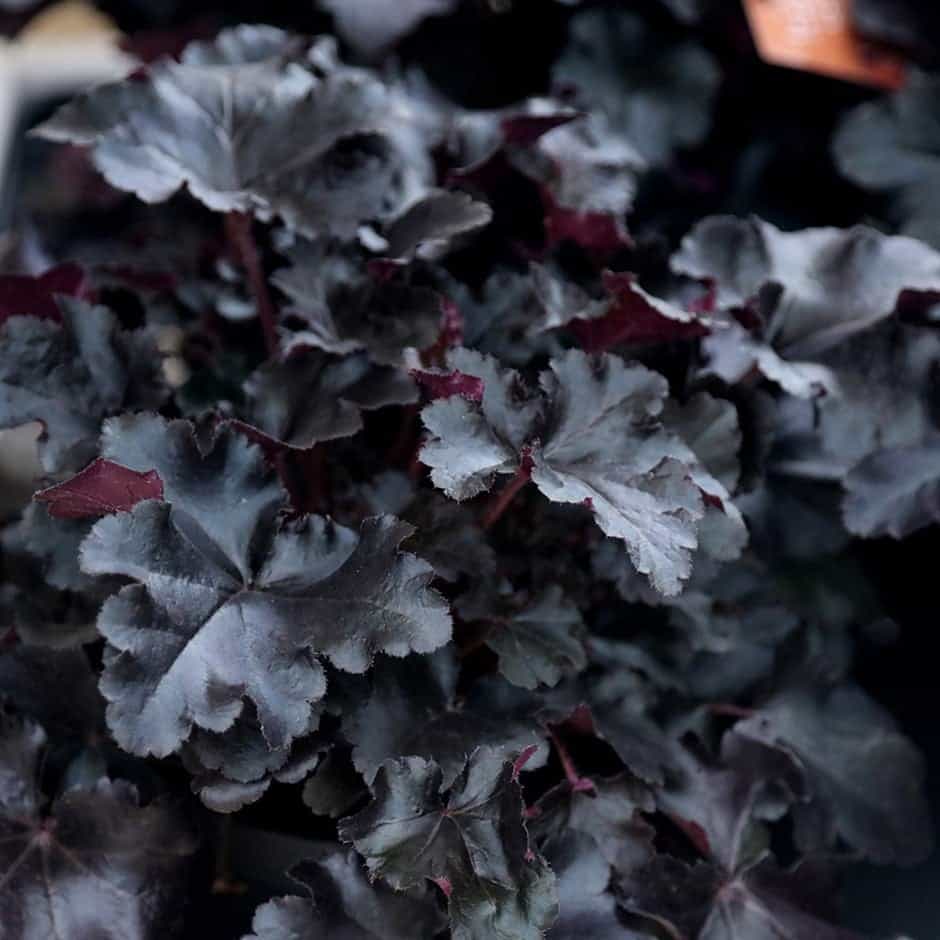 In the case of Heuchera “Black Pearl” it’s the leaves that are a beautiful glossy black. It’s a perennial plant, and semi-evergreen, so it can add a dash of black to your garden throughout the year.

It forms a pleasing domed mound, up to 1.5 feet tall and the same diameter. It looks perfect as a border to a path in a cottage garden. And it works beautifully in pots and containers too.

It flowers in the summer months, with small white blossoms providing an attractive contrast. It likes fertile moist or well-drained, but not dry, soil. Lifting and dividing the clumps every few years will reinvigorate the plants.

The leaves will eventually get tatty. Removing them when they do will encourage fresh growth. Give the plants a mulch of well-rotted organic matter in the Spring, too. That will give them a head start as they enter the growing period. 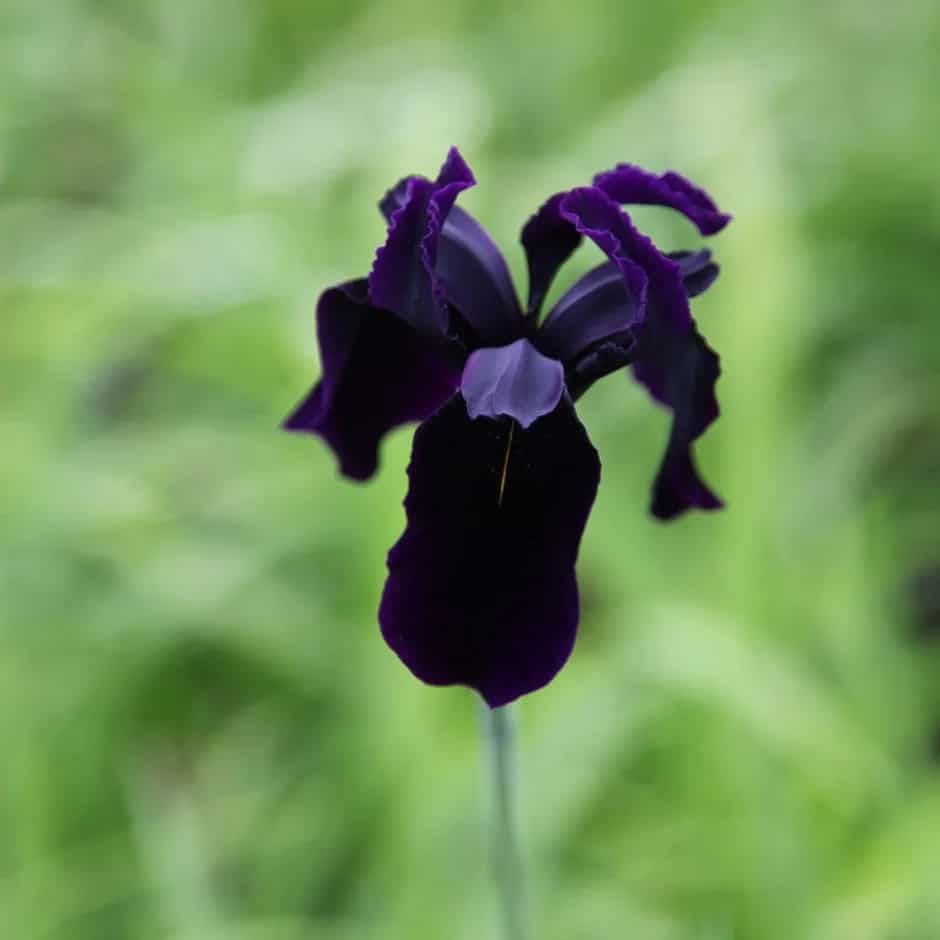 This gorgeous, velvety petaled iris is a deep indigo that’s almost black. And if you look closely, you’ll see the slenderest streak of gold on its petals. That accounts for its Latin name, Chrysographes, which means “gold marked”.

It’s a perennial plant, which dies back every Fall and blooms again in the Spring. It will do well in either full sun or partial shade, and it needs reasonably fertile soil.

Its height – up to about 1.5 feet – makes it well suited to a position in the middle of a border. If you’re lucky enough to have a pond in your garden, irises always look wonderful near water. And they like boggy ground too.

They can be planted in containers as well. But if you do that, you’ll need to lift and divide the clumps every couple of years. That’s a job to do in the Spring.

Give them a feed each Spring too, with compost or rotted organic matter. And keep them moist, especially while they’re getting established.

There are other irises with very dark, almost black, blooms too. You could also consider Iris germanica “Obsidian”, and the bearded variety Iris germanica “Black is Black”. 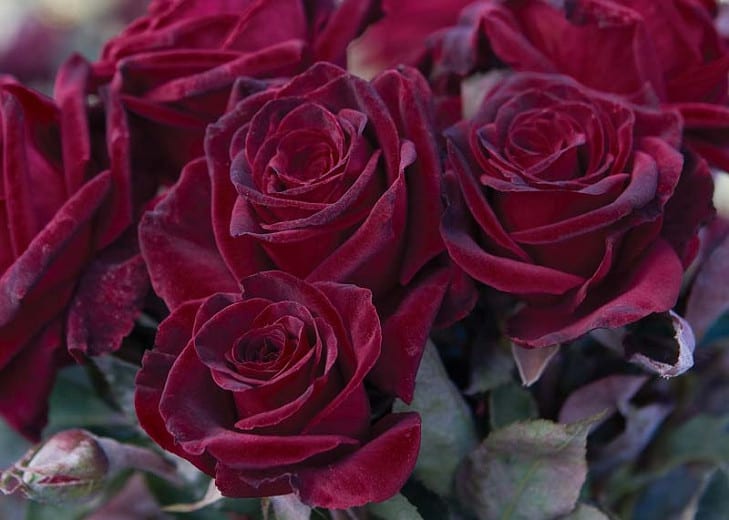 If you’re looking for a black rose, the variety known as “Black Baccara” is one of the best options out there. It’s a stunning tea rose in a rich, deep burgundy that appears almost black in the right light.

It’s a vigorous, thick rose bush that grows to just over 3 feet tall. The beautiful blooms are up to 4 inches across, making a spectacular display in the garden. They work beautifully as cut flowers too.

You’ll get plenty of roses each year. The plant flowers repeatedly across the summer and well into the Fall.

It grows best in fertile soil that’s rich in humus and well drained, and with plenty of sunlight. In the late winter and early spring, add a mulch of well-rotted organic matter around the base of the plant. A good feed with rose or general-purpose fertilizer in the Spring and summer will help it along too.

It can, though, be vulnerable to attack from aphids, mites and other insects. Keep an eye out for any signs of infestation. Giving the leaves a thorough spray with soapy water will take care of most problems. 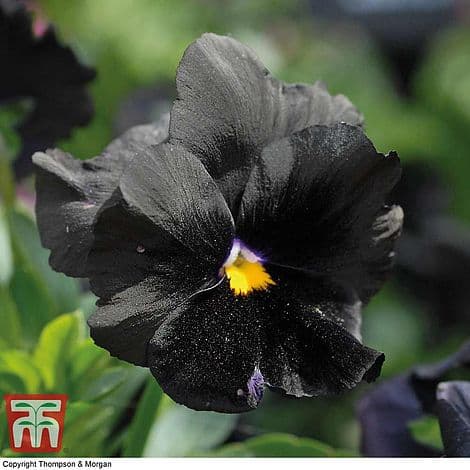 Pansies are well known for their rich, velvet colors. And their petals frequently feature areas of black near the center. But this variety, “Black Moon” are completely black, save for a small flash of lemon yellow at the middle.

The Latin name for them is Viola x wittrockiana. The flowers are beautifully dark and glossy, and they’ll grow happily in full sun or partial shade.

Their compact habit makes them well suited to containers and hanging baskets. But they also look beautiful planted in large swathes across a flowerbed.

They can be sown in early Spring or in the summer months. Flowering takes place from March to August. And they’re a hardy perennial, capable of returning year after year.

Each plant can grow up to about 8 inches, with a maximum spread of 10 inches. And if you want to add some floral flair to your cooking, the petals are edible too. Crystallized versions make a stunning topping for desserts. Or add the petals straight from the plant into salads.

Pansies are readily available as plug plants in Spring, but Black Moon is a rarer offering.  A more cost-effective option is to buy them as seeds, as they’re very easy to grow. 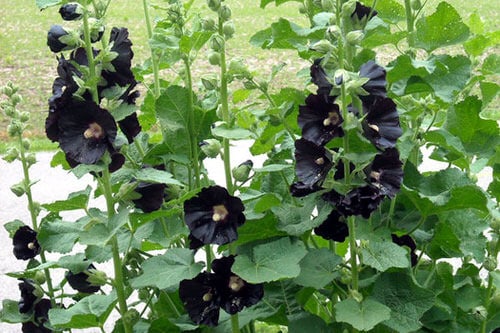 If you’re looking for a tall plant to add impact at the back of a border, you can’t go wrong with a hollyhock. And this stunning variety, with its dark petals, will create pure drama in any garden.

Alcea rosea “Nigra” has flowers that are somewhere between deep chocolate and maroon. At their center, they’re almost black. They are held aloft on tall green spikes up to 7 feet tall.

They’re happy in chalk, loam or sandy soil, as long as it’s well-drained. They need plenty of sunshine, so a south or west-facing bed will suit them best.

They can be grown from seed, either propagated with the aid of mild heat in the winter, or planted in flower beds in the Spring. Watch out for slugs and caterpillars, which enjoy making a meal of the young growth. Flea beetles can chomp away on the leaves too.

Their height means they’re vulnerable to damage from the wind. Sow them in a sheltered position, or stake them to provide extra support. 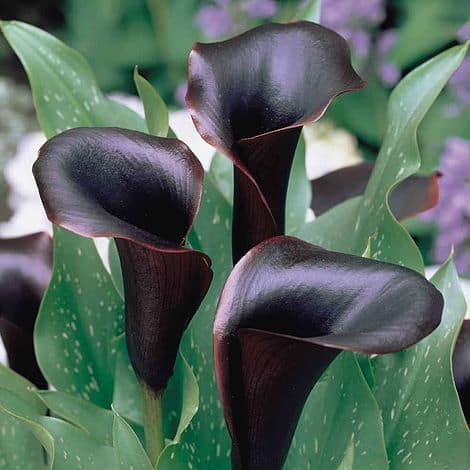 The trumpet-like flowers of Arum lilies – or to give them their Latin name, Zantedeschia – are showstoppers in any garden. Add to their elegant forms a deep burgundy shade that’s almost black, and you have the “Black Star” variety.

These stunning flowers are the darkest Arum lilies available. And their graceful, upright habit is almost architectural.

They’re also amazingly tolerant of a wide range of conditions. Although they prefer full sun, they’ll cope with partial shade too. Plant them as tubers and, if you keep the plants warm and dry over winter, they’ll return year after year.

The flowering period is relatively brief, between May and July. The plants grow up to two feet high, and have a spread of about 8 inches. They look fantastic in either beds or containers. And they make a beautiful and long-lasting cut flower. 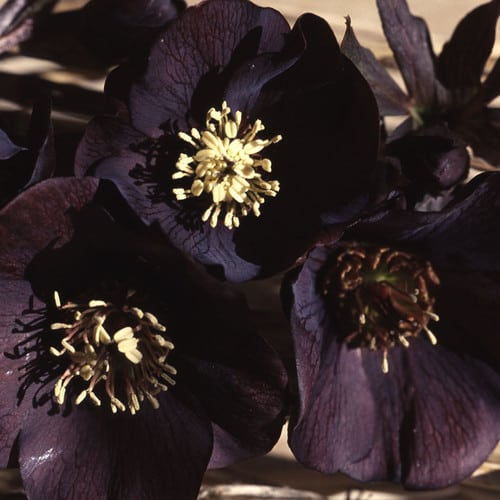 Hellebores belong to the same family as buttercups. Take a look at their lovely flowers with their rounded petals and you’ll see the family resemblance at once. But this variety has gorgeous almost-black blooms instead of yellow ones.

When they’re in bud, they’re a shade of slate gray. Once opened, they’re the deepest plums and purples.

You can grow them from seed, and they’re happy to be planted at any time of the year. They’ll cope with any aspect and soil type. But they don’t like too much sun, so a bed in partial shade is best.

They germinate in the cold, so you won’t have to worry about planting them in heated trays. Just pop them in compost and keep them moist.

When the soil starts to warm, usually around February to March in the northern hemisphere, they’ll begin to grow. Flowers appear shortly afterwards.

They form clumps and they’re hardy perennials – so they should reappear year after year. They’ll grow to a maximum height of about 18 inches, with the same spread. That will take them between two and five years. 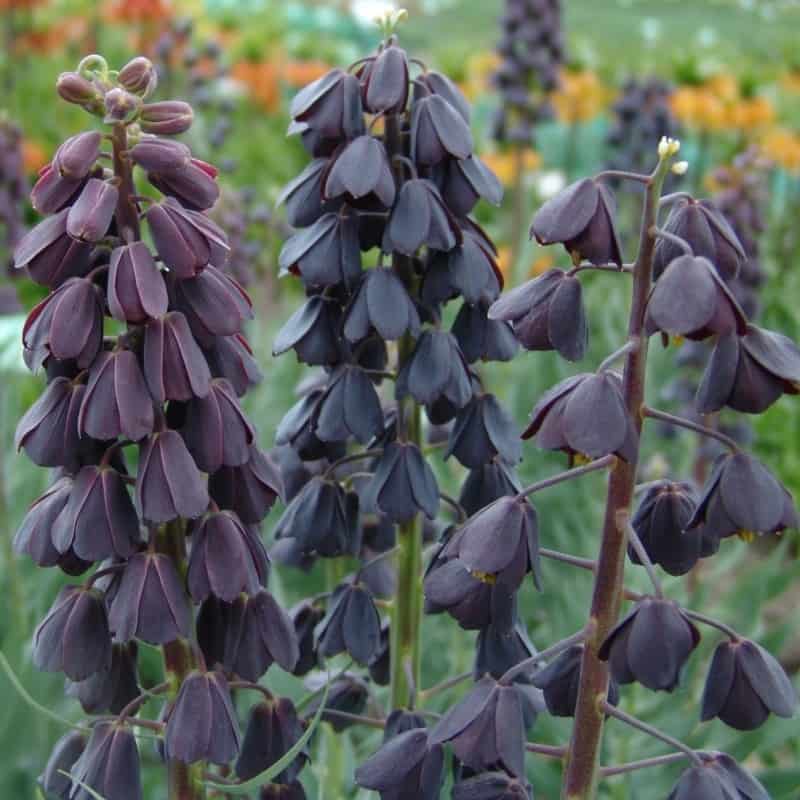 The black Persian lily, or Fritillaria Persica, is another very striking deep burgundy flower that could pass for black. It features columns of small bell-shaped flowers all the way around tall stems.

It’s equally at home in containers or flowerbeds, and the tall flower spikes are particularly suited to cottage gardens.

It flowers in the Spring, and it’s robust enough to handle winter frosts and return the next year. It will cope with soil of any pH, but it needs to be well-drained and not too heavy. It likes full sun, and prefers a south or east-facing aspect. And it will manage hotter temperatures than other Fritillaria.

If growing the plants from seed, place them in containers in a cold frame. The seeds need the chill to germinate. Divide offsets in the late summer to create new plants.

They’re not particularly vulnerable to disease, although they can be damaged by slugs and the lily beetle.

Each plant can grow up to 3 feet tall with a spread of up to 18 inches. And it takes between 2 and 5 years to reach its full size.

We hope you’ve enjoyed our look at 11 plants with black flowers and leaves. Whatever the soil or conditions in your garden, and whatever effect you’re looking for, there are options here to suit.

There’s no doubt that black blooms add sophistication and drama to any planting scheme. We hope you’ve found something to include in your own garden design.