The savanna – grassy plains in sub-tropical or tropical regions – is a unique environment for wildlife. And it’s not just feathered and furry creatures that make it so interesting. It’s also home to an array of fascinating plantlife.

We’re going to take a look at the different types of plants in the savanna. We’ll find out how they’ve adapted to survive there. And we’ll learn about the part they play in the rich ecosystem of the grasslands.

Want to find out more? Step this way …

Types of Plants in the Savanna

When we picture the savanna, we often imagine wide plateaus covered in tall grasses. And one of the plants that helps give it that distinctive appearance is Rhodes grass.

It’s a grass that really stands out from the crowd. It can grow to anywhere from 2 feet to 10 feet tall. And it’s nothing like the single blade most of us think of when we imagine grass.

Instead, it’s a stalk with a spray of racemes – flower clusters – extending in a fan shape from the top. Each raceme can be up to 6 inches long.

It’s not fussy about soil type, and it can cope with very little rain, making it perfectly adapted to the savanna.

It’s also a very valuable plant to farmers in the sub-tropics, requiring little or no maintenance. The seeds germinate in under a week. And it can grow to its full size in only three months.

It can be used as feed for animals (the young grass is richest in nutrients). Or it can be grown as groundcover to protect the soil from erosion.

The African Baobab is one of the most distinctive trees on the planet. It features heavily in African landscape art, its stout trunk and rounded crown totemic of the savanna.

The people of the Zambezi have a legend that explains the tree’s unusual appearance. The baobab, the story goes, was too proud. So the gods uprooted it and threw it back to the ground upside down.

It can grow to anything between 16 and 82 feet tall, and it’s an astonishingly long-lived tree. Carbon dating has found some specimens that are more than 2,000 years old. The oldest recorded baobab was 2,450 when it died in 2011.

Its presence is a good sign for humans and animals. It shows that somewhere nearby its long roots have found water. That water is stored in its trunk and branches, allowing it to tolerate long periods of drought. During the dry season, it drops its leaves to conserve moisture.

It also has a thick, fire-resistant bark and fruit with thick shells. Young trees can sprout new growth after wildfires. And more mature specimens are usually tough enough to withstand the heat.

The roots, leaves and fruits of the tree are used as food by people and animals, and baobab juice is believed to cure diarrhea. The bark can also be used to make cloth. 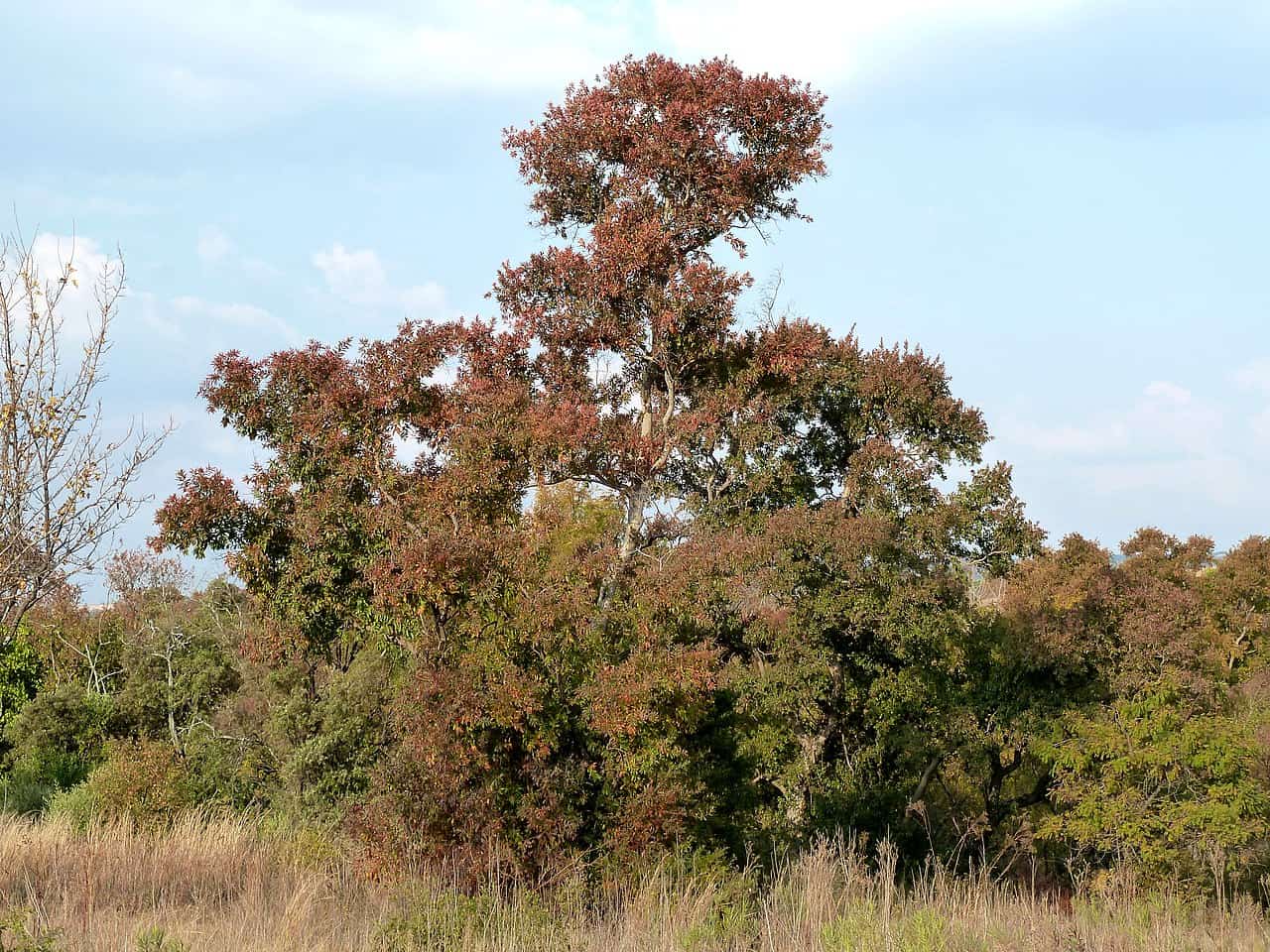 The African River Bushwillow is another striking tree. As its name suggests, it can be found growing along riverbanks in southern Africa. There, it soaks up the groundwater it needs to live.

It can grow to a height of up to 40 feet, with a crown of rich foliage and a multi-stemmed trunk. It’s capable of surviving in a wide range of conditions. It’s both tolerant to drought and hardy against frost.

It’s another plant that has a wide range of medicinal uses. The roots, although poisonous, are boiled to rid the body of toxins. They’re also used as a treatment for venereal disease.  And the bark is mixed with herbs as a remedy for sores.

It’s best to steer away from the fruit, though. Like the roots, they’re considered toxic. And they’re also believed to induce hiccupping!

But that’s not an issue for the wasps who lay their eggs inside the fruit. When they hatch, the larvae feed on the seeds. The southern black tit is wise to this habit, and will tap the fruit to see if there are larvae inside for a tasty dinner.

The leaves of the tree also provide food for animals including giraffes, elephants, nyala and bushbuck. 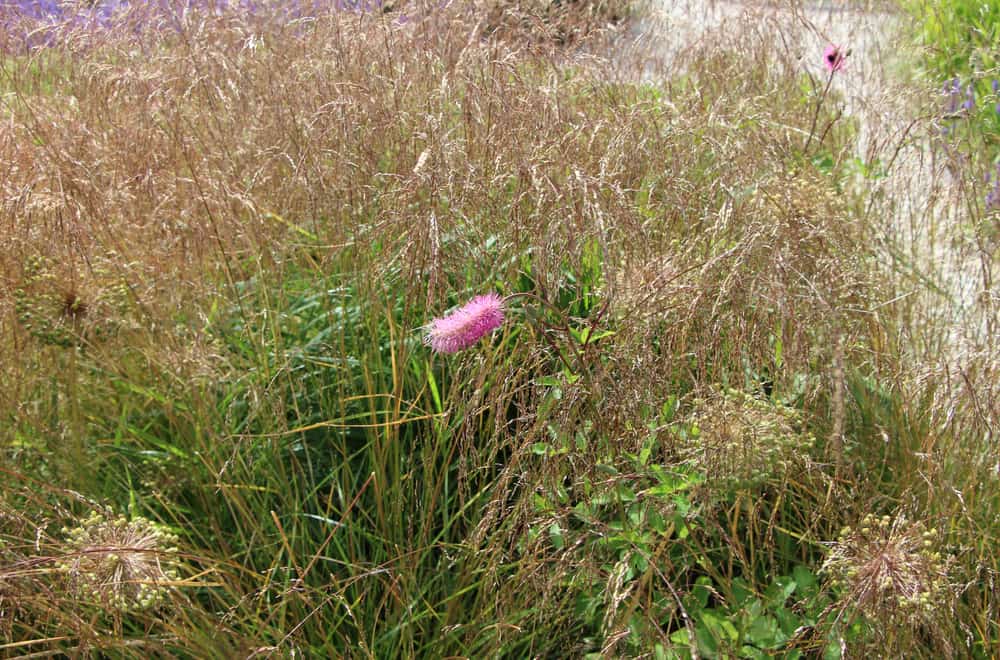 Red oat grass also goes by a number of other names, including red grass and rooigras. As well as the African savanna, it can be found growing in Asia and the Pacific Islands. It’s also found in Australia, where it’s known as kangaroo grass.

It grows in thick tufts which can be up to 5 feet tall. Its name comes from the reddish colored spikelets that are produced in the summer months. In winter, they turn a gray-green color.

It tolerates poor soil and can survive in a wide range of temperatures. In Australia, specimens have been found that were over 50 years old. It’s high in protein. And it’s lower in carbohydrates than other forms of grass, making it good grazing for obese horses.

It provides food for many different species of birds, and it can also be eaten by cattle and other livestock. Its dense growth protects the soil and conserves moisture, creating the perfect habitat for insects.

Its distinctive appearance means that humans sometimes use it as an ornamental plant. But it’s more usually put to practical use.

The hollow stems are used to thatch the roofs of houses in Uganda. And the root is used as an ingredient in medicine for painful periods. The seeds can even be eaten when other food is scarce. 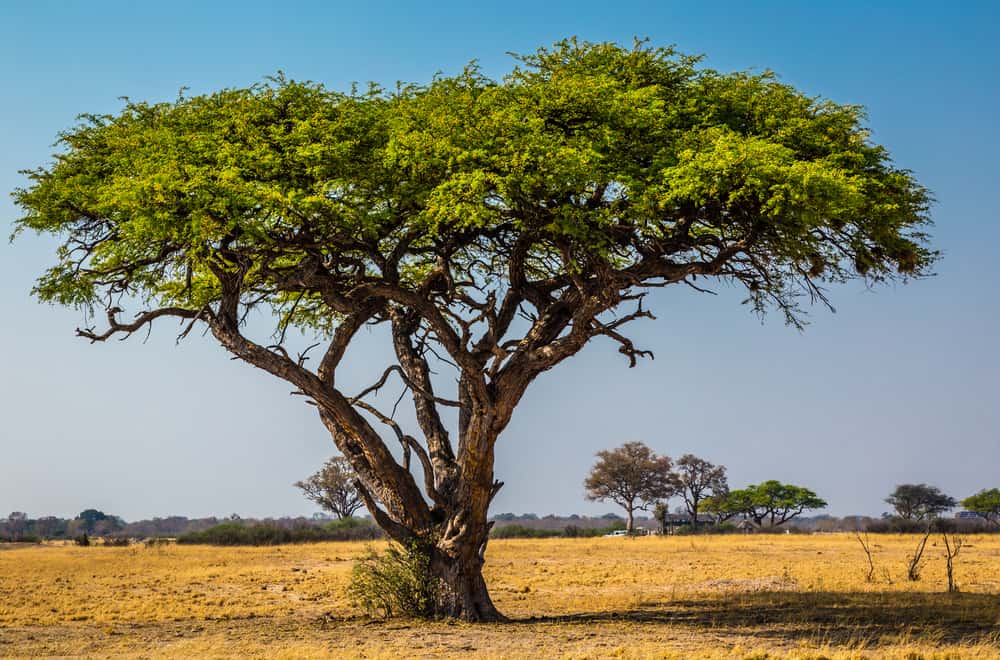 The mighty acacia tree is another well-known savanna landmark.

There are many different species. They include the Gum acacia, native to Sudan, and used for a whole range of valuable products. They include adhesives, inks, drugs, and confectionery.

The bark of most acacias is also rich in a substance called tannin, used to treat leather and process dyes.

Its use dates back thousands of years. Its wood is referred to in the Bible as being required for the construction of the Ark of the Covenant.

In ancient Egypt, the leaves were ground to make a remedy for haemorrhoids. And the acacia even makes its way into royal legend. Pharaoh Amenhotep II is recorded as advising that, in the absence of a gold and bronze battle-axe, a club of acacia wood would do.

Elephant grass is also known as Napier grass and Uganda grass. As you’d expect from its name, it’s tall, standing up to 26 feet tall after 8 months of growth. It grows in dense clumps, a bit like bamboo.

It can grow in a wide range of different habitats too, at anything from sea-level to 6,500 feet. And it has numerous uses, ranging from food for livestock, especially cattle, to biofuel.

It’s also used as a natural form of pest control. Planted around the edges of fields of maize, it attracts stemborer moths which would otherwise devour the crops. It’s a more sustainable, more effective, and less expensive approach than using insecticides.

Elephant grass can be used as a food for people too. The young shoots and leaves can be cooked to make stews and soups.

The African savanna is the primary habitat for the Jackalberry tree. It gets its name from its fruit, which are a tasty treat for jackals. But it’s also known as the African Ebony, and in Afrikaans as “jakkalsbessie”.

It can often be found growing on top of termite mounds. On average, it grows to between 12 and 20 feet tall, although it can occasionally get much taller – up to around 80 feet. It has dark green oval leaves, and blooms with cream flowers during the rainy season.

It’s not just jackals who feed on the tree. The fruit are eaten by a number of different types of wild animals. And its leaves are foraged by grazing beasts like buffalo and elephants.

The fruit is edible by people too, and it has a citrussy flavor. It’s said to have a chalky texture before it’s ripe, but then becomes sweet and fleshy. It’s most usually dried before being eaten as a snack, although it’s also preserved, used for making brandy and beer, and ground into flour.

Like so many savanna plants, it has medicinal uses too. The roots, bark and leaves contain tannin, and can be used to stem bleeding. The roots are also used to get rid of parasites, and are believed to be a cure for leprosy. 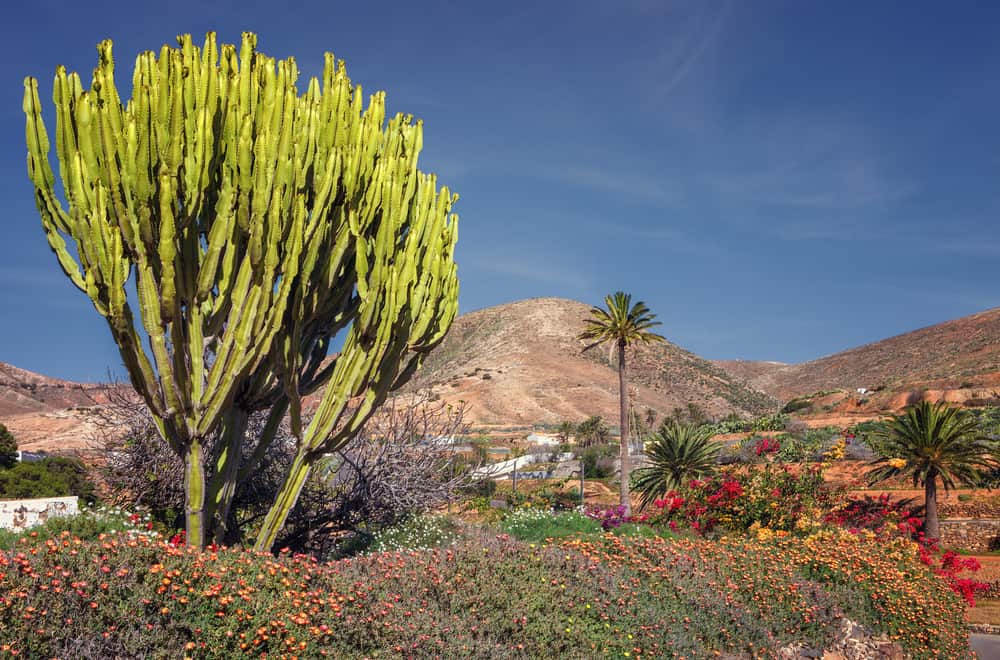 The Candelabra tree is another savanna plant with an unmistakeable appearance. As its name suggests, it has a tall stalk with branches that curve outwards like the stems of a candelabra. It’s also known as the naboom.

It stands between 19 and 26 feet tall and has thick, ridged stems that look a bit like those of a cactus. It flowers in the autumn and winter months, producing small greenish yellow blooms. It also bears fruit, which turn purple when they’re ripe.

Its roots can find fissures in rocky outcrops, or dig down to anchor the tree in the sand. It can survive long periods of drought, holding water in its stems.

It’s sometimes used as a natural boundary because of its sharp spines. And if a drop of the latex sap touches your skin, it will blister. Even the fumes can burn, and if it gets in your eyes, it can cause blindness.

The branches make good nesting sites for birds, however, who also enjoy dining on the seeds. And the flowers are attractive to bees and other pollinators. 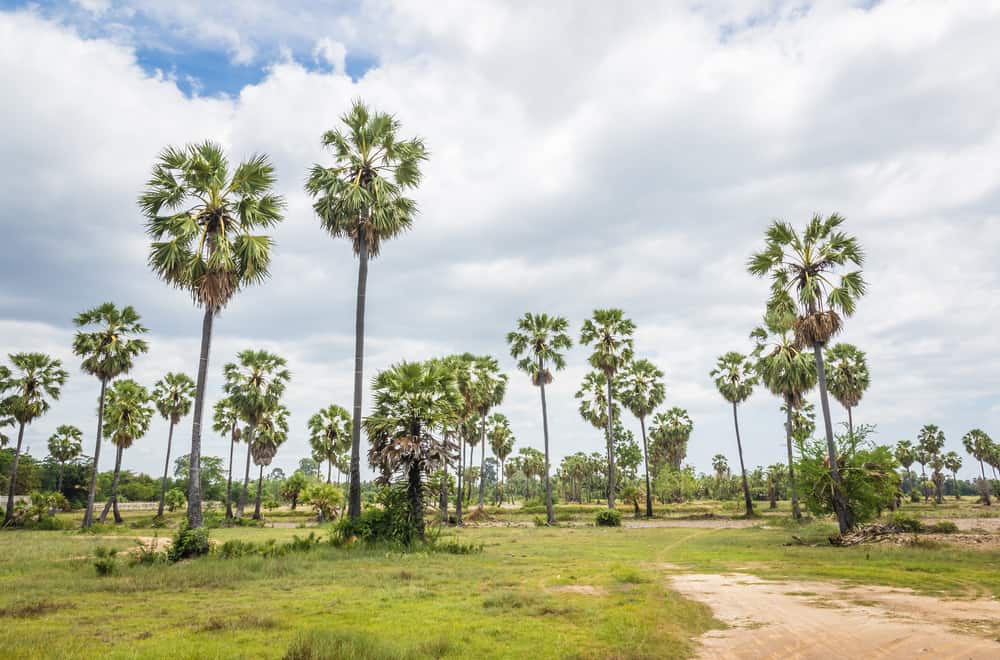 The Palmyra palm is a type of fan palm, so called because of the large fronds that look like fans. The tree can be found in the tropical savannas of Africa, Asia and Papua New Guinea.

Each leaf can grow up to 10 feet long. And each tree produces male and female flowers, which are carried on different parts of the fronds.

The palm produces round fruits too, each of which contains between one and three seeds. The color varies according to the species and can be orange, yellow, brown or black.

The seeds are enclosed in a tough, woody case that protects them when they’re eaten by elephants or monkeys. When they germinate, they burrow deep into the ground, with only a few leaves visible at the surface.

Things stay like this for a number of years while the plant is getting established. Its minimal presence above ground helps to protect it from wildfires.

Finally, when it’s stored up all the nutrients it needs, it grows quickly, fast outstripping most surrounding vegetation. Its final height can be anything up to a massive 100 feet. 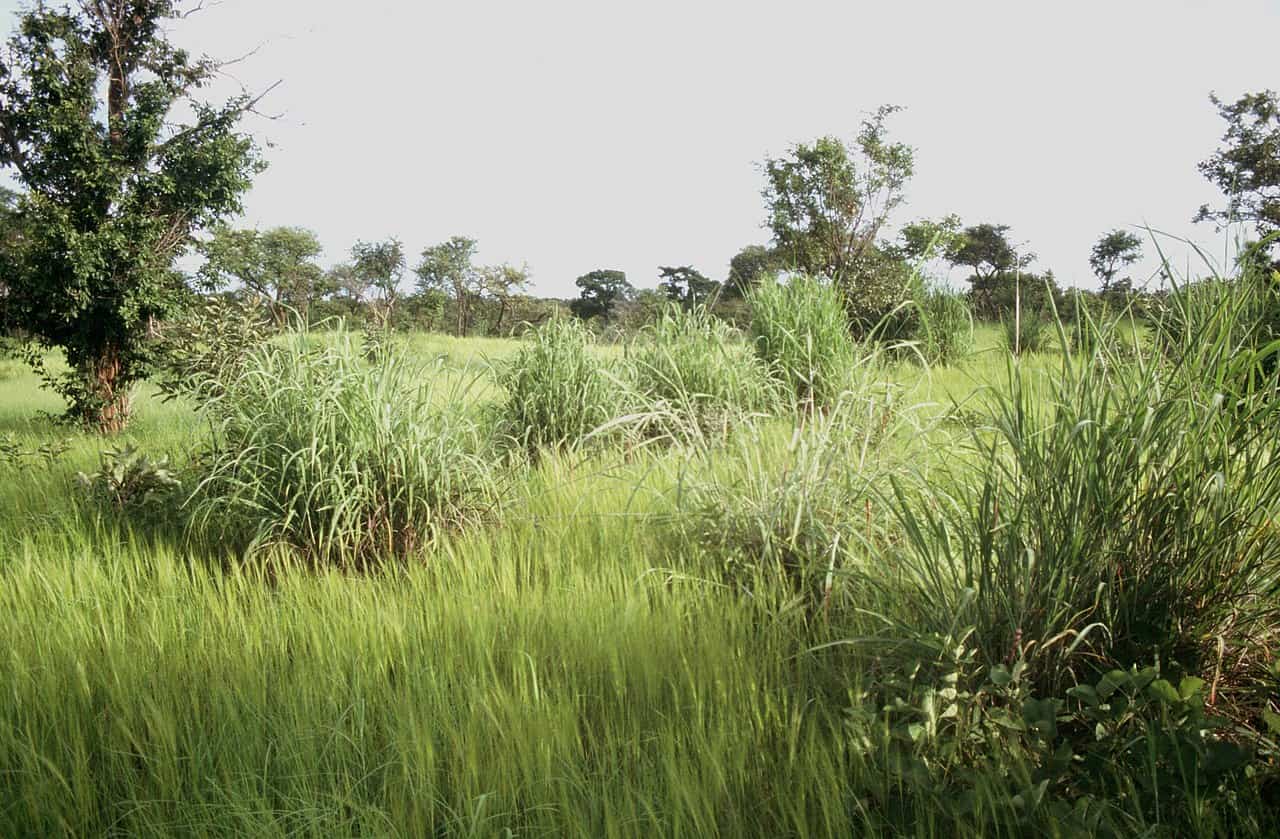 Tambuki grass also goes by the names of Rhodesian blue grass, bluestem, and gamba grass. It’s found in the tropical and sub-tropical savannas of Africa.

It can grow up to 13 feet tall in clumps almost 2.5 feet across. It copes very well with drought, with thick, vertical roots that can stretch deep into the soil to find moisture. It doesn’t like the cold, though, and it isn’t frost hardy.

It produces lots of seeds every year, which are dispersed by the wind across wide areas. It’s a valuable food for cattle. And because it grows quickly, it’s a good option for preventing soil erosion and for reclaiming land that’s been overgrazed.

Strips of grass are also used as thatch for roofing in some parts of Africa.

But in some areas, it’s proved too successful. In parts of Australia, it’s crowded out other native species. There’s now strict legislation to control its spread in Western Australia, the Northern Territory and Queensland.

The Amazing Plants of the Savanna

That brings us to the end of our look at different types of plants in the savanna. We hope you’ve enjoyed learning more about these resilient trees and grasses.

The plants here have adapted to cope with the threats of drought and fire. And they provide food, shelter and medicine for both people and animals. It’s no exaggeration to say that without them, life for many species in the savanna would simply be impossible.