Thistles are striking plants, with leaves and flowers that have an architectural quality. The thistle is also the national flower of Scotland, honored for its combination of beauty and strength.

Some thistles are cultivated as garden plants, while others grow wild in the countryside. We’re going to look at 14 different types of thistle plants.  And we’ll find out what conditions they need to thrive in your garden – if you want them to!

So if you’re ready, step this way to find out more … 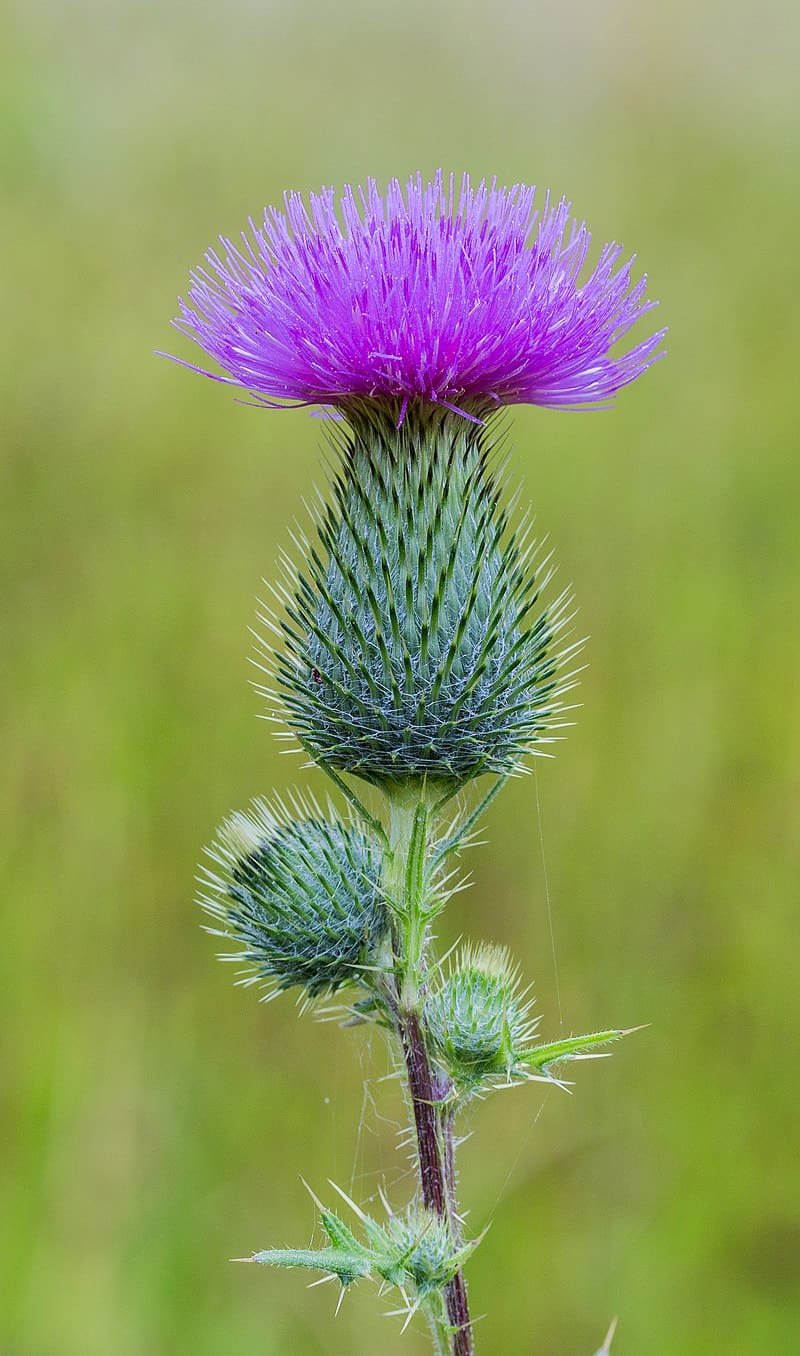 No-one knows for sure which species of thistle lies behind the Scottish emblem. The spear thistle, though, is a hot contender.

This one grows wild in both rough and cultivated ground. Roadside verges, meadows, and around the edges of crop fields are all common habitats. Indeed, it can make itself something of a nuisance on farmland.

You can spot it in summer by its distinctive small, purple flowers. The leaves are a green-grey color, and they’re very spiky. Watch out for them if you’re walking through a field wearing shorts!

This perhaps isn’t the most beautiful thistle for use in gardens. But it’s a valuable little plant in the ecosystem. Its flowers are popular with pollinators and other insects, and its seeds provide food for birds. 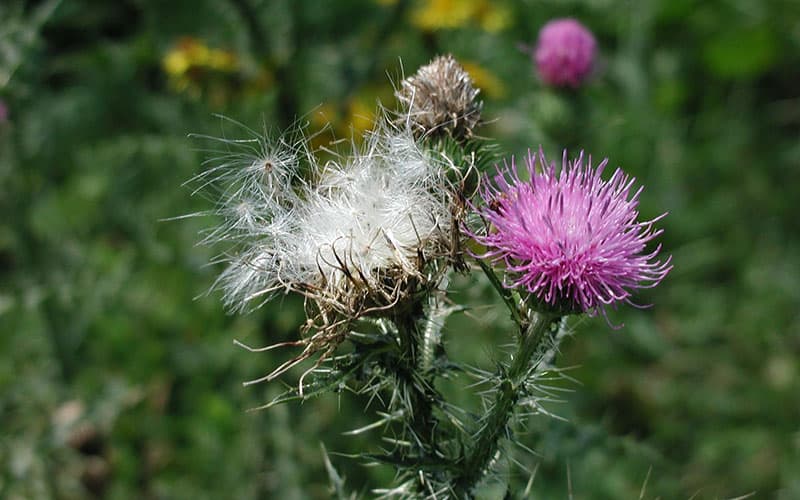 The musk thistle is another variety that flowers in summer. The blooms appear in the northern hemisphere from June to August. They’re large and purple, and carried on nodding heads. The petals have the typical spiky look of thistles, surrounded by leaf-like structures known as bracts.

The flowers are a draw to insects, and the plant is a great friend to the Painted Lady butterfly. It provides a rich source of food for its caterpillars.

The seeds play their part in sustaining other species too. They’re particularly popular as food for linnets and greenfinches.

The musk thistle likes chalky soil and rough ground. You’ll often find it on wasteland, scrub, rough grassland, and roadside verges. It can grow up to a height of 5 feet. And it’s another thistle with tough, spiny leaves. 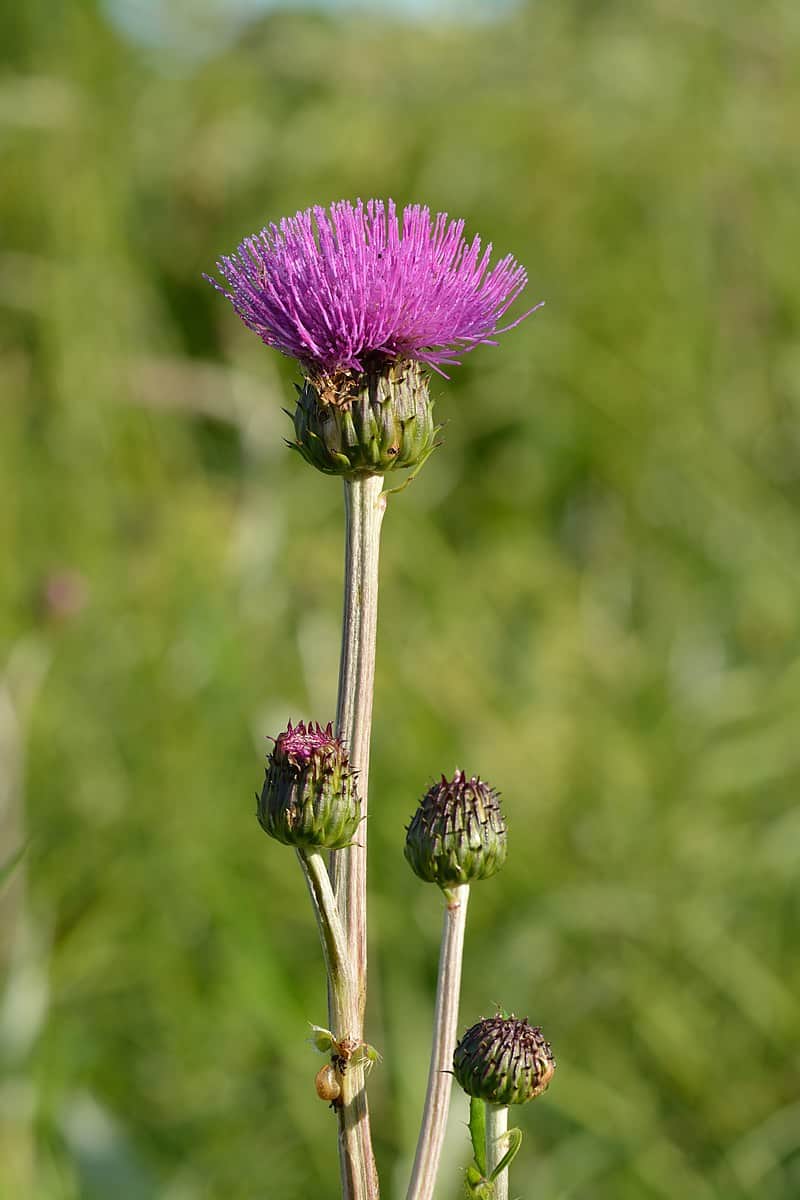 The melancholy thistle gets its name from its traditional use to treat depression. The famous Culpepper’s Herbal, published in the seventeenth century, stated that it could make people “merry as a cricket”!

It can be found growing in meadows, grassland, roadside verges, alongside streams, and even woodland where the trees aren’t too dense. It isn’t the most common of thistles, and in Northern Ireland it’s subject to a wildlife protection order.

It’s unusual in other ways too. Each plant produces a single purple-red flower that droops at first, before standing upright as it matures. And the leaves aren’t spiky, instead having a white cottony covering on their undersides.

The plant can grow to anywhere between 18 and 47 inches tall, while the flowers can be up to 2 inches across. They appear later in the summer, between July and August in the northern hemisphere. 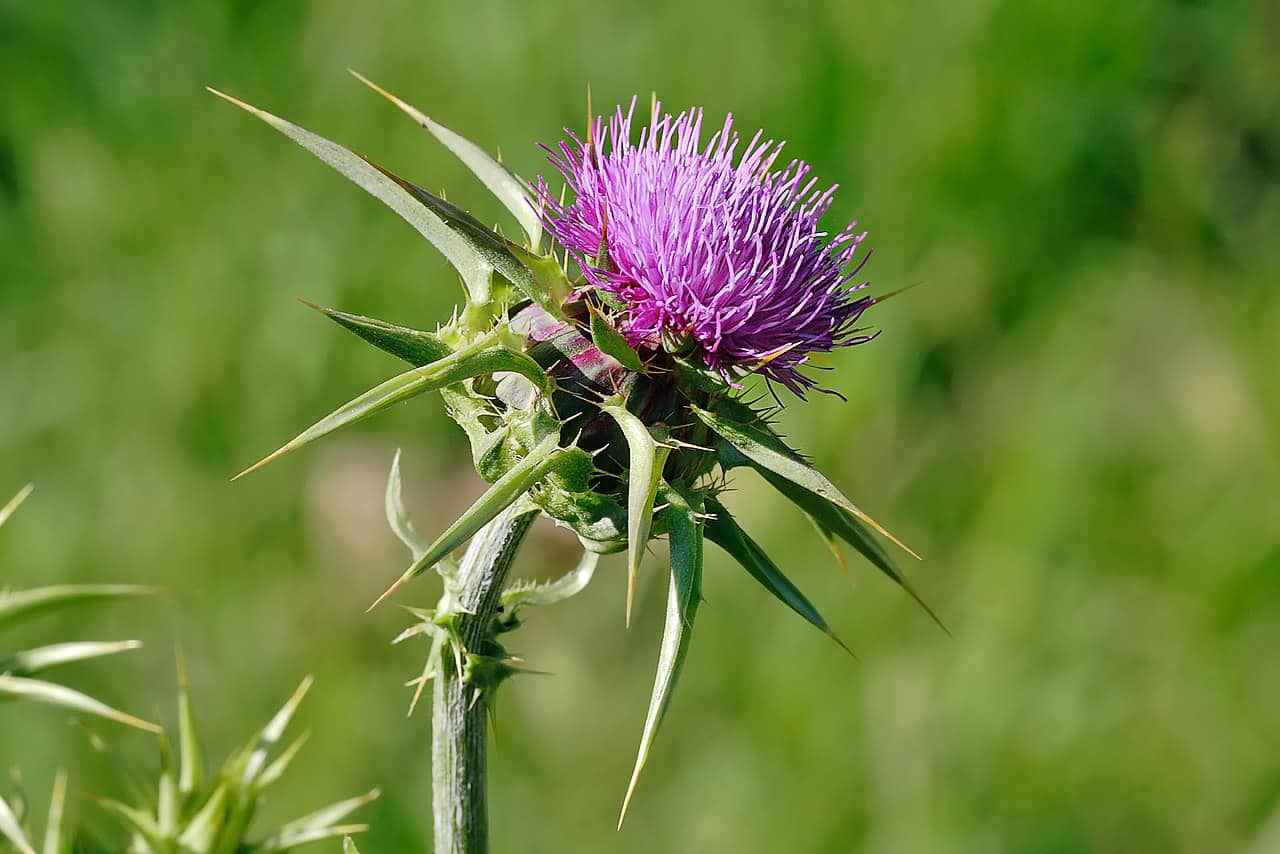 Silybum marianum may win the prize for the thistle with the greatest variety of common names! It’s variously known as the St Mary’s thistle, Our Lady’s thistle, Marian thistle, Mediterranean milk thistle, milk thistle, blessed thistle – and the list goes on.

It was originally native to southern Europe and Asia, but today has spread around the world. It can be found growing in sunny meadows and on disturbed ground. The plant can grow up to 79 inches tall, and the large, reddish-purple flowers appear in the summer.

It’s an invasive plant, and can cause problems on agricultural ground. It contains nitrates that are poisonous to cattle.

But it has also been used as a herbal remedy for centuries, with reputed benefits for liver problems and diabetes. As yet, however, the scientific evidence to support its use in medicine is inconclusive. 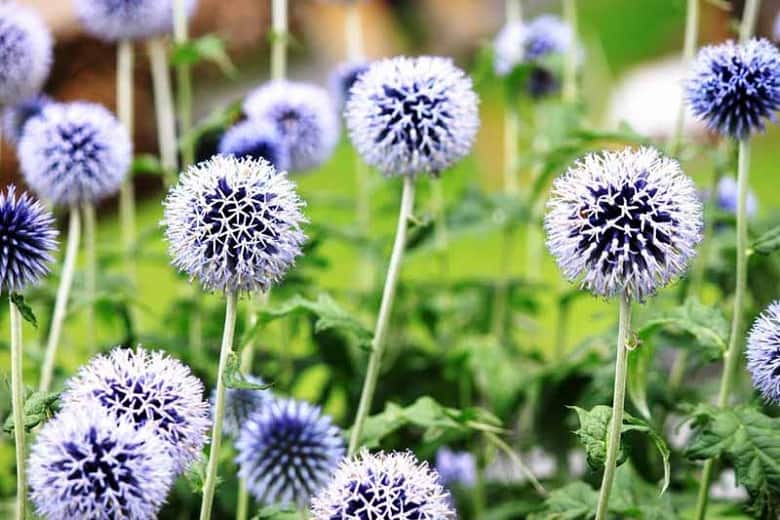 If you’re looking for a thistle for the garden, plants from the Echinops genus, known as the globe thistle, are excellent candidates.

As the name suggests, the flower heads are spheres, in beautiful shades of steel blue and white. They’re held aloft on long stems that grow up to 5 feet tall. And they make a striking addition to any flowerbed.

They like sun, but will tolerate partial shade, and they can cope with any kind of soil.

They’re low maintenance and, outside the flowering period in late summer to early fall, they’re drought-resistant. Leave the flower heads alone, and they’ll self-seed readily too. 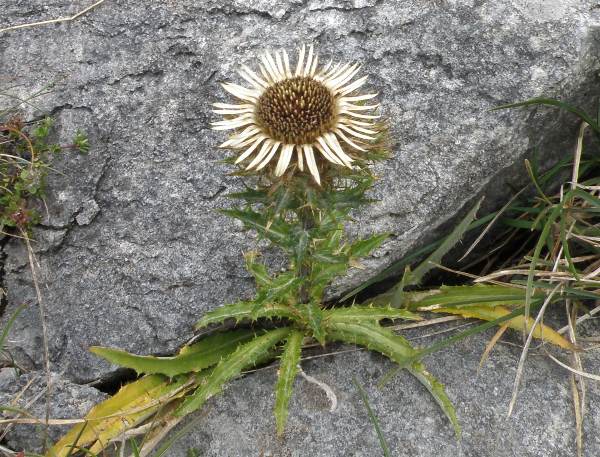 The carline thistle is a wildflower that’s rather unusual among the thistle family.

The flowers here aren’t purple or pink, or even blue or white like the globe thistle. Instead they’re a golden brown, looking rather like other thistles that have gone to seed. In bright sunshine, they glimmer with tones of silver and gold.

They flower between June and September. And when the flowering period has finished, the flower heads remain in skeletal form, often until the following spring.

This is a shorter thistle, growing to a maximum of around 2 feet. And it likes dry grassland with chalky soil.

It’s a great source of nectar for a wide range of butterflies, including the Chalkhill Blue, Gatekeeper, Brimstone, and Dark Green Fritillary. 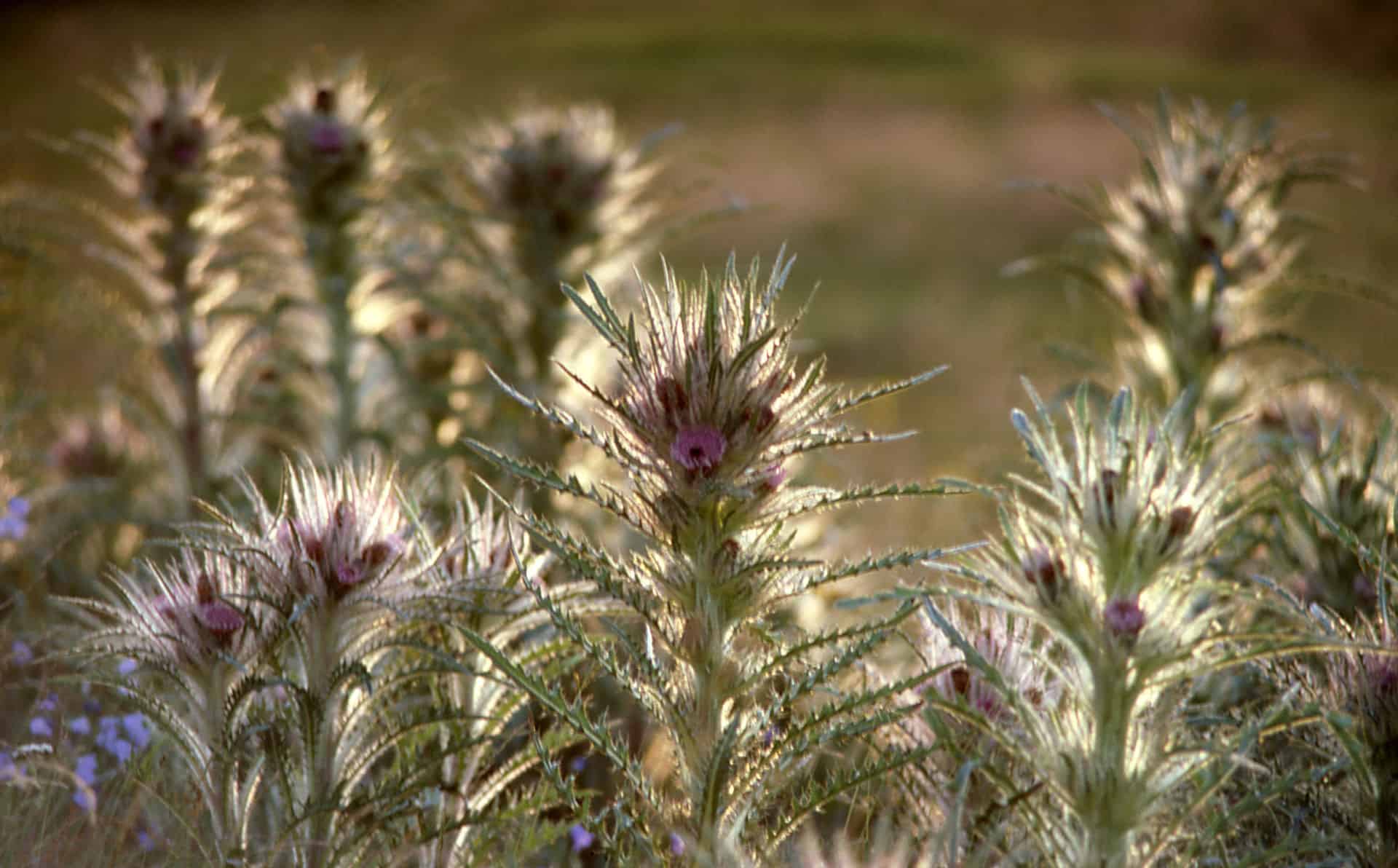 Various different species of thistle are known as the “dwarf thistle” around the world. Cirsium scariosum can be found across most of western North America. But there’s also Cirsium drummondii, found in the northern US and Canada, and Cirsium acaule, native to Europe.

Cirsium scariosum is also known as the meadow thistle and the elk thistle. The dwarf variety is so short it appears to have no stem at all. There’s just a flat rosette of leaves with a group of flower heads at its center. It’s that appearance that gives it two of the other names by which it’s known: the rosette thistle, and the dinnerplate thistle.

The flowers are purple, but because they’re so low to the ground, they can be difficult to spot among the leaves. They appear from spring right through to fall. 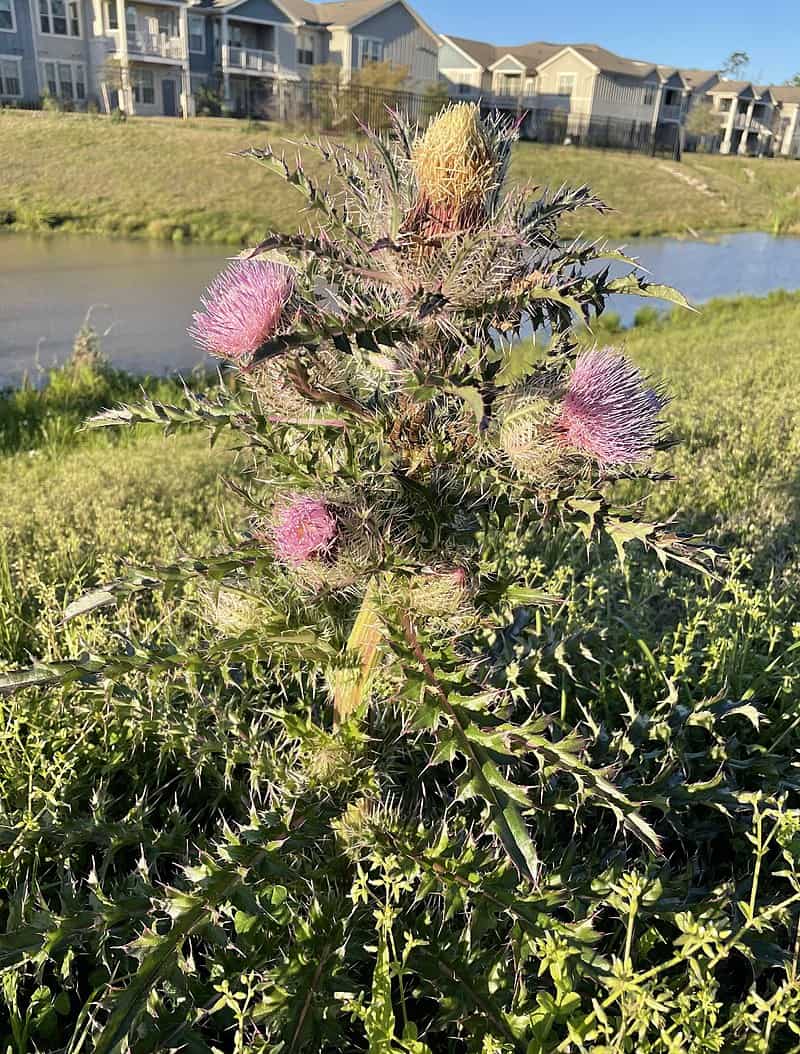 Cirsium horridulum goes by many names. It’s known as the bristle thistle, yellow thistle, bull thistle or even, unkindly, the horrid thistle.

It’s native to North America and is found widely across the southern and eastern US. It’s a robust plant, growing up to 100 inches tall and with a strong taproot. The leaves are long too, up to 16 inches. And both the leaves and the flowers are covered in sharp spines.

All that means that once it’s established, it’s very difficult to get rid of. Nevertheless, it’s an endangered species in some parts of the country. If you find a plant in Connecticut, Pennsylvania, New Hampshire or Rhode Island, leave it alone. It’s a rare survivor.

It can be a valuable plant too. It provides rich food for the larvae of butterflies like the Painted Lady and Little Metalmark. And the flowers are loved by bees and other pollinators. 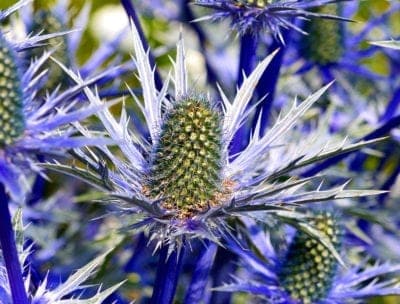 Strictly speaking, sea holly isn’t a thistle at all. But take one look at it, and you’d be forgiven for thinking that it is. Its striking conical flowers are surrounded by long, spiky bracts, and there are spiky leaves too.

There are a number of different varieties, with blooms in colors from blue to white. And they’re a great option if you’re looking for an architectural plant for your garden.

They like dry soil and plenty of sun. They’re fully hardy, and semi-evergreen, so can provide interest right through the winter. The flowering time, though, is the summer – July and August in the northern hemisphere.

The plants will grow up to 2.5 feet tall, and they look great interspersed with wildflowers, or contrasting with roses. Their marbled leaves look particularly good when the plants are in gravel. 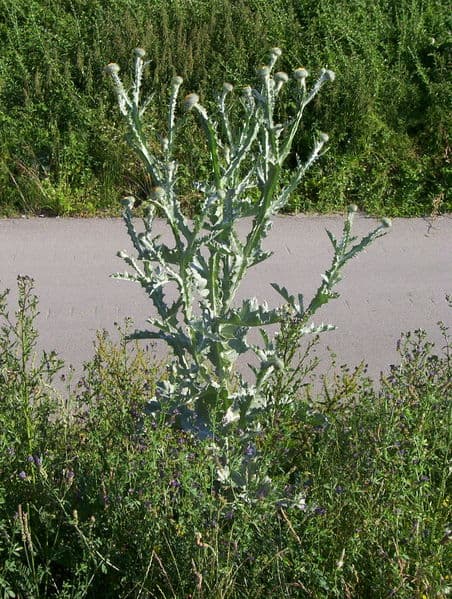 The cotton thistle is also known as the Argentine thistle and down thistle. And it’s another great option to create a striking focal point in your garden.

It can grow up to an impressive 13 feet tall, with delicate gray leaves up to a foot long. In summer, the purple flower heads can grow to 2 inches across.

It takes some time to reach its full height – anywhere between two and five years. When fully grown, it has a significant spread too, anything up to 3.5 feet.

It can handle any soil type, as long as it’s neutral or slightly alkaline, but it likes its soil to be well-drained. It needs plenty of sun too.

But in the right conditions, it’s low maintenance. It doesn’t need any pruning, and will self-seed freely if you don’t deadhead it. 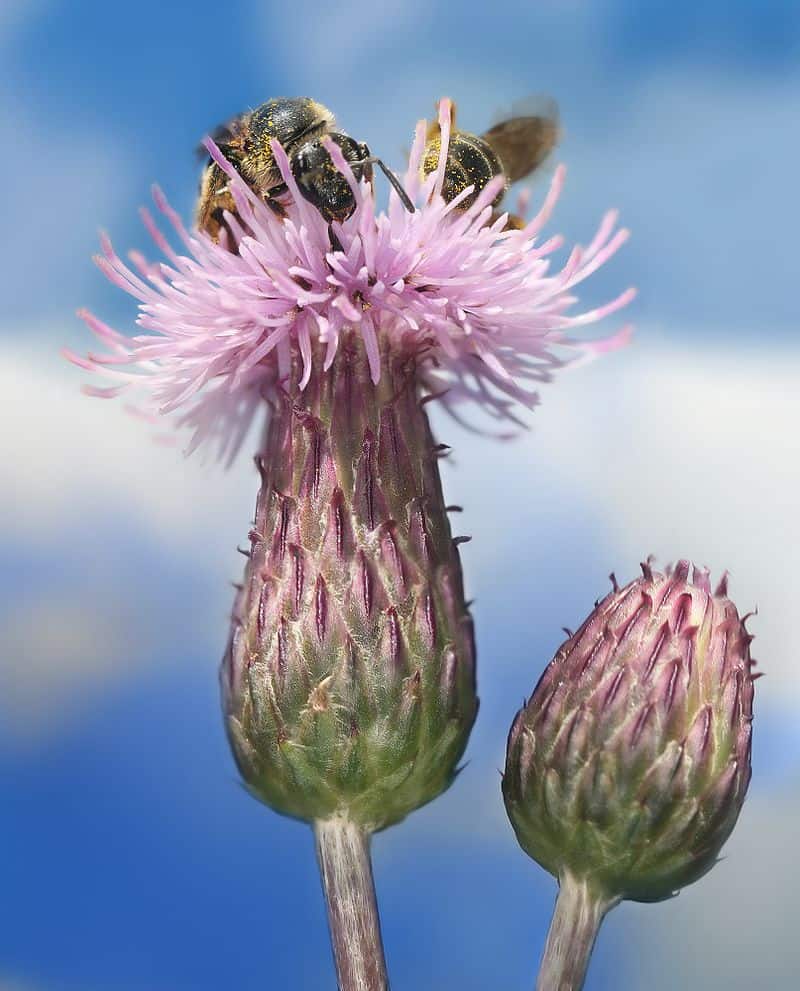 The Creeping thistle is a pretty plant that can grow up to 5 feet tall. It can work well in larger gardens as part of a wildflower area. But it’s best avoided if you have a smaller yard. Once established, it can quickly spread, taking over whole areas.

The different emotions it inspires are reflected in its wide variety of alternative names. It’s known as the Canadian thistle, corn thistle, small-flowered thistle and way thistle. But you may also hear it referred to as the cursed thistle, stinger needles, and lettuce from hell thistle!

It produces multiple small, purple flowers on a single stem. The blooms are loved by pollinators, including honeybees, and by insects like grasshoppers and beetles. 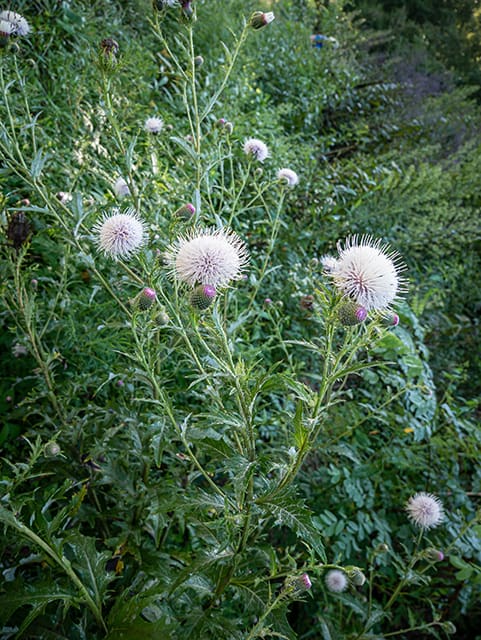 The field thistle can be found across much of the United States and Canada. It grows up to 79 inches tall, with large, showy flower heads that are a great draw to pollinating insects. The colors range from lilac through to a darker purplish pink.

There’s only one flower stem per plant, which gives it a sculptural quality. The tops of the leaves are green, while the undersides have a white, cottony appearance. It’s similar in many ways to the spear thistle, but the flowers are less spiky and usually paler.

It’s not a great choice for smaller yards, but it can be very effective as part of a wildflower meadow. And the nectar is a rich source of food for butterflies like the Painted Lady. 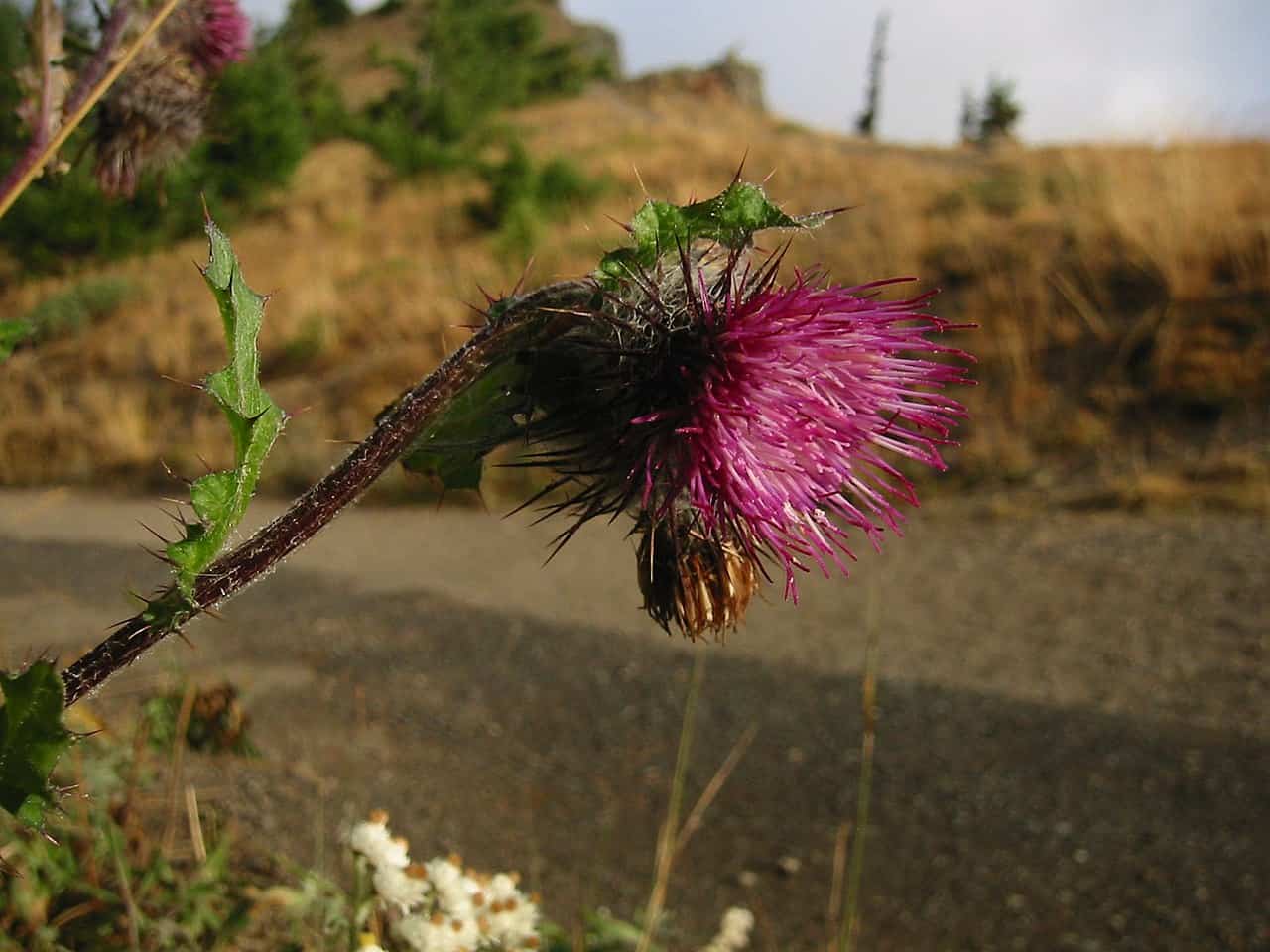 Fancy growing a thistle that you can eat as well as look at?! The common name of Cirsium edule is the edible thistle – and that’s just what it is.

It’s native to North America and can grow to 5 feet tall, as long as it gets plenty of sunlight. It produces pink flowers and spiny leaves. But those aren’t the parts to chow down on.

If you want to try eating this thistle, you need the root. It looks white when taken from the earth, and has a similar consistency to a carrot. And the flavor is unexpectedly sweet.

You can try eating the stems too, although you’ll need to peel those first.

But take care: the thistle contains insulin. That means that it can cause digestive problems for some people. 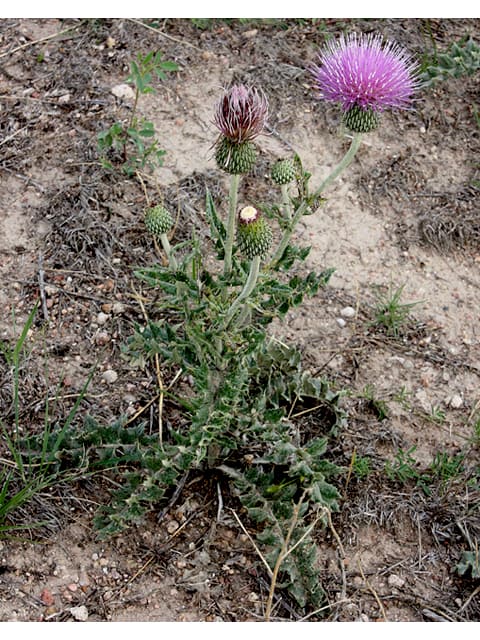 The wavyleaf thistle is another plant that looks just like you’d expect from its name. The leaves here have an attractive undulating appearance. But the flower head is the typical spiky form with green bracts below. There can be many flowers on each stem, or only one.

It’s found growing wild all over the US and as far south as northwest Mexico. It can grow in prairies, woodlands, forests and disturbed ground.

It’s also an immensely useful plant. Native Americans traditionally use it for everything from food to medicine. Birds like goldfinches use parts of the plants to line their nests. And the flowers attract a wide range of pollinating and other insects.

The Striking and Useful Thistle

That brings us to the end of our look at 14 types of thistle plants. We hope you’ve enjoyed learning more about them!

Their distinctive appearance makes thistles one of the easiest plants to identify. And while not all varieties are suitable for the garden, they all play a valuable part in the ecosystem.