The tundra is an area where the ground is permanently frozen. It covers the Arctic and northern regions of Europe, North America and Asia. The harsh conditions are reflected in its name: tundra means “treeless”.

But despite the inhospitable conditions, some plants manage to not only survive, but thrive. We’re going to look at 14 different types of plants in the tundra. And we’ll find out how they handle the cold.

Types of Plants in Tundra 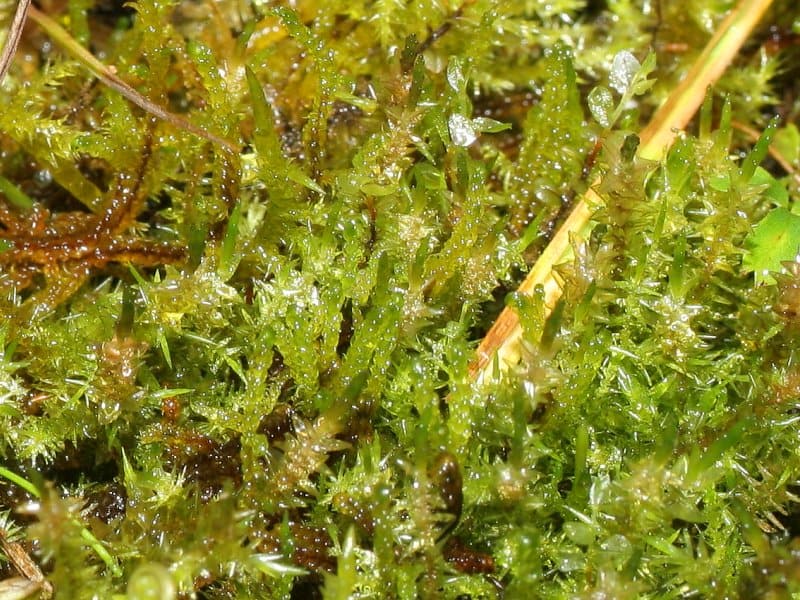 Arctic moss is tough enough to grow in the midst of the Arctic tundra. There it copes with harsh temperatures of down to minus 13 degrees Fahrenheit in the winter months. Summer is a relatively balmy 50 degrees Fahrenheit – but that only lasts for between six and eight weeks.

There’s barely any sunlight either. And the ground is dry, getting only 12 inches of rain in an average year.

But that doesn’t matter to the Arctic moss. Because this is a plant that grows underwater, in lakes and bogs.

Like all mosses, it has tiny leaves and reproduces by throwing out spores. This one doesn’t have flowers. And it grows very slowly – less than half an inch a year.

It’s very efficient in its use of the sparse nutrients the tundra has to offer. When it isn’t growing, it stores them up. That allows it to produce new leaves quickly when warmer temperatures return in the spring. 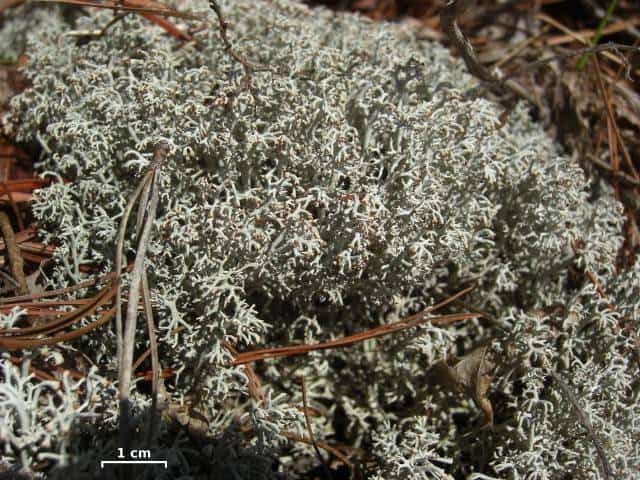 Also known as reindeer moss or reindeer lichen, caribou moss is a very striking plant. It looks like a mass of foam, and can grow to a height of between 1 and 4 inches. But although it’s called a moss, it’s actually a type of lichen.

Lichens are well adapted to the tundra, because their roots aren’t damaged by frost. And they’re able to make food, even in low temperatures and with limited light. When it’s too cold and dry even for them, they simply go dormant until conditions improve.

Caribou are one of the few creatures that can eat lichen. They have special microorganisms in their gut that allow them to digest them.

The plant is also used as a traditional remedy by some indigenous peoples. The Mopa people of the Eastern Himalayas use it to remove kidney stones. And the Inland Dena’ina of Alaska boil it to make a medicine for diarrhea. 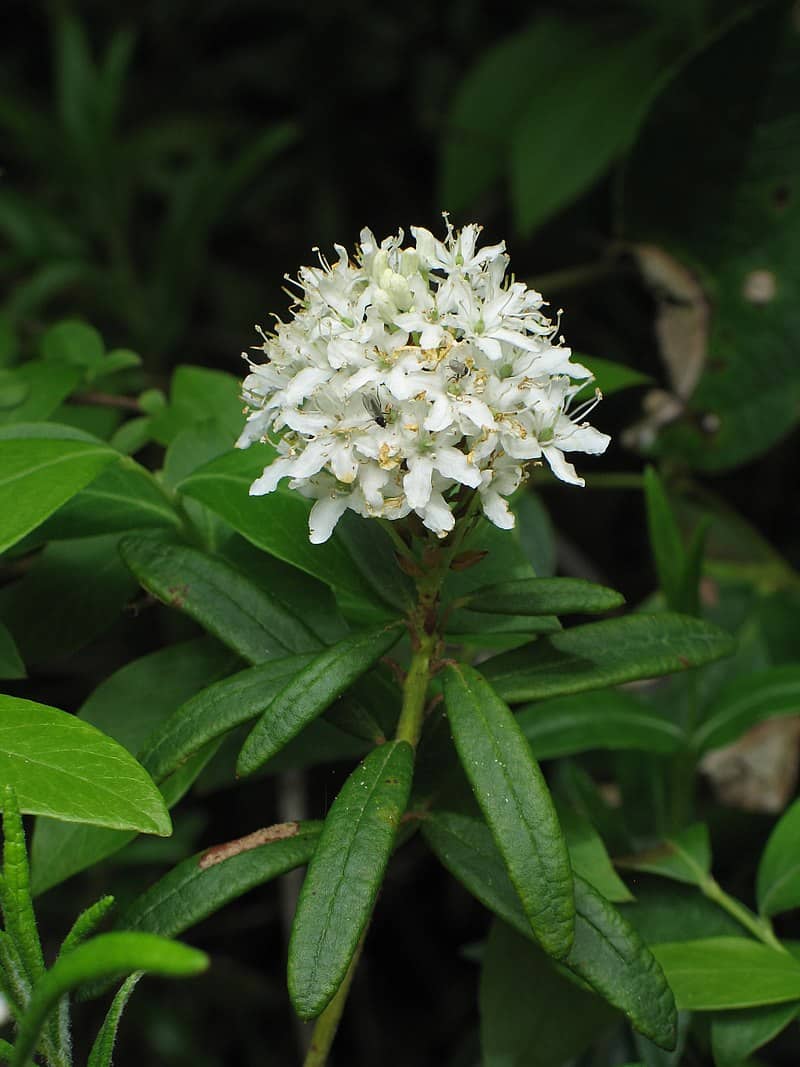 Rhododendron groenlandicum is known by a variety of common names. As well as Labrador Tea, you may hear it referred to as St James’s Tea, Marsh Tea, Swamp Tea and Hudson Bay Tea.

You might not be surprised to learn, therefore, that its leaves are used by Native Americans for – you’ve guessed it – tea! The preparation is rich in vitamin C.

But the plant is used in other ways too. Leaves scattered amongst clothes are said to ward off moths. And a branch stored with grain is believed to deter mice.

The plant’s appearance varies according to where it’s growing. In the harsher conditions of the northern tundra, it creeps over the ground, forming a low carpet. But in the milder southern regions, it can grow up to 5 feet tall.

It has small narrow leaves, with hairy undersides. And in the summer months of June and July, small clusters of white flowers appear at the end of the branches. 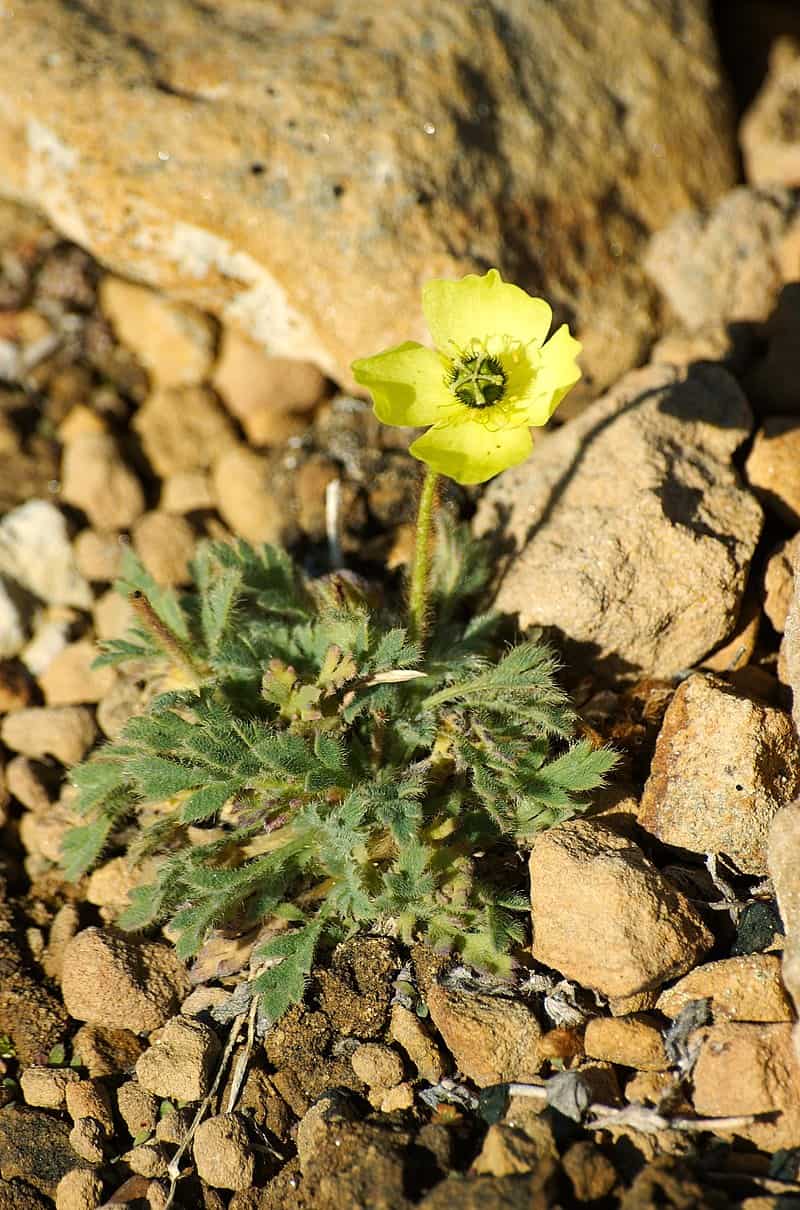 The Arctic poppy is also known as the rooted poppy and yellow poppy. This pretty yet tough little plant grows throughout the tundra, as well as in the alpine regions of Asia, North America and Europe.

And despite its “yellow poppy” moniker, it can also have white flowers. These are usually found only in more remote locations.

Its stems and sepals are covered in hairs that help insulate it from the cold. It grows to face the sunlight, and the cup-shaped flowers trap the heat and direct warmth to the plant’s reproductive organs.

It grows up to 10 inches tall, and can be found in dry riverbeds and meadows, and on mountainsides. It grows especially well between stones, as they trap any available heat and shelter the roots. 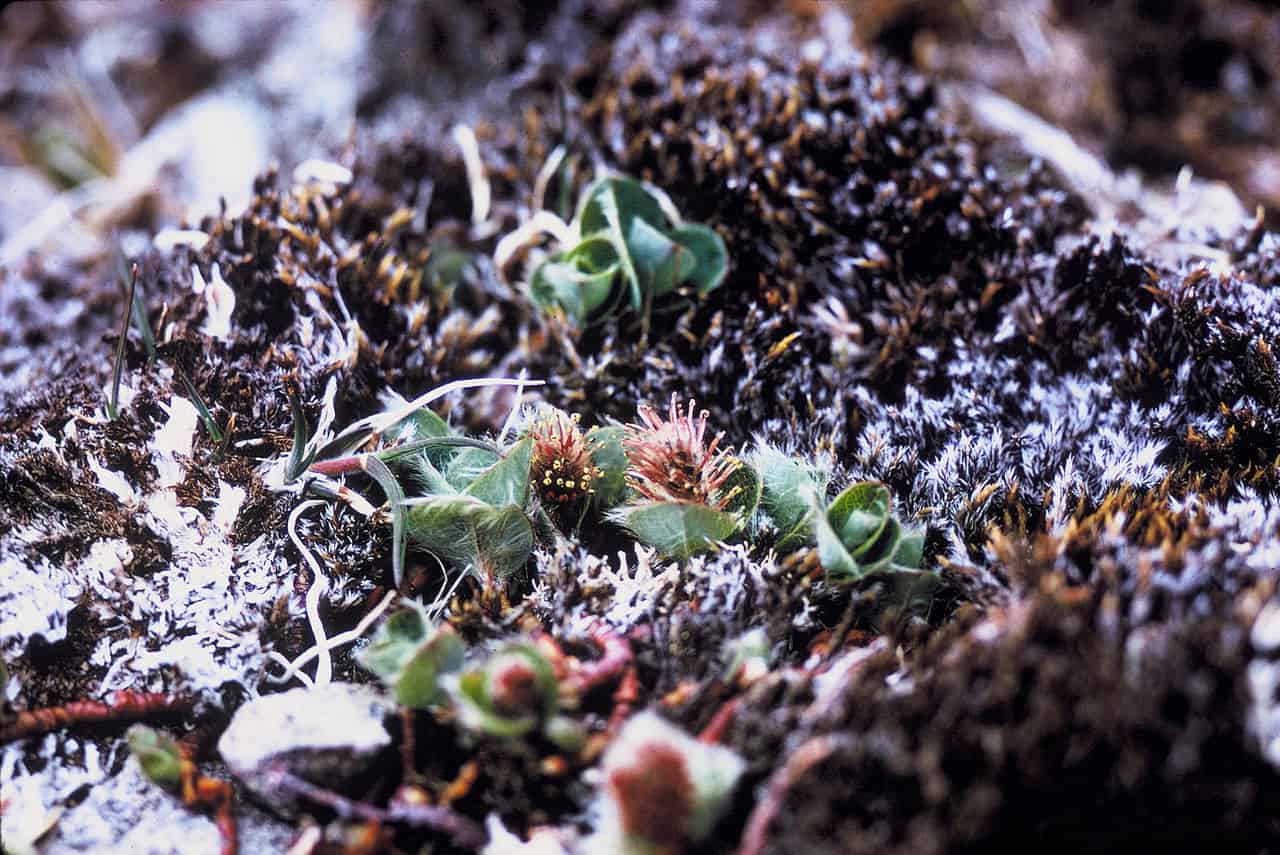 The amazing Arctic Willow is the only woody plant capable of growing in the tundra.

Despite being a member of the willow family, though, it’s not a tree. It generally grows to a height of around just 6 inches. But in the favorable conditions of the Pacific Northwest, it can reach a maximum height of 20 inches.

The harsh Arctic climate means that the plant grows very slowly. But it also lives for a very long time. One specimen found in Greenland was tested and found to be an astonishing 236 years old.

It provides a valuable source of food for animals including Musk oxen, Arctic hares, caribou and lemmings. 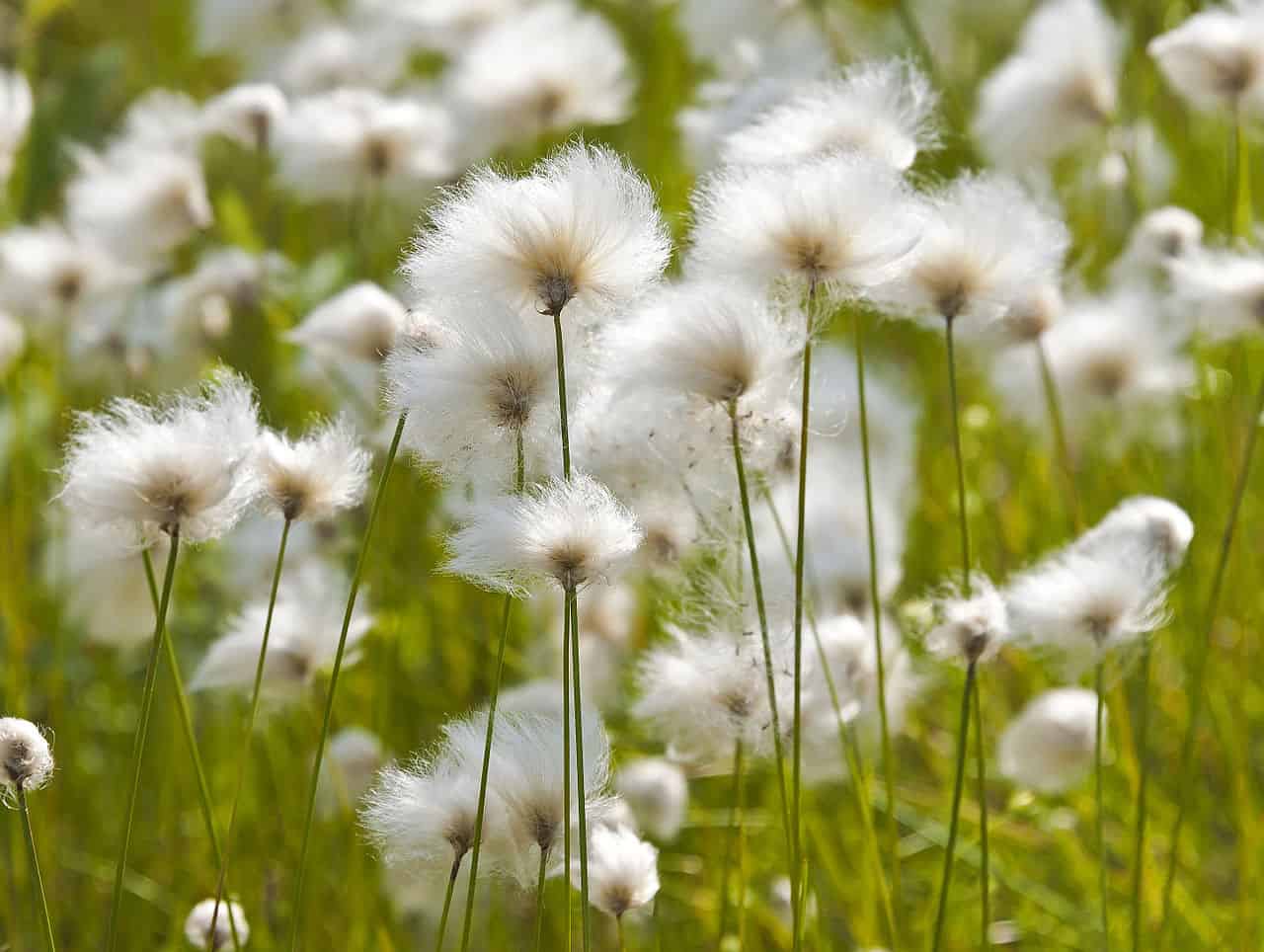 Arctic Cottongrass, known in Inuktitut as pualunnguat, is one of the most widespread plants across the tundra.

Its distinctive appearance comes courtesy of the single fruit that grows atop each stem. It looks like a fluffy ball of cotton wool. It’s this woolly substance that insulates the seeds. And when the wind blows, they’re dispersed in a similar way to those of a dandelion.

It grows up to 20 inches tall, and the fruits appear in the summer months of June to August.

The Inuit use the seed heads to provide wicks for their seal oil lamps, and as nappy liners. But the plants also provide food for many forms of Arctic wildlife, including snow geese and caribou. 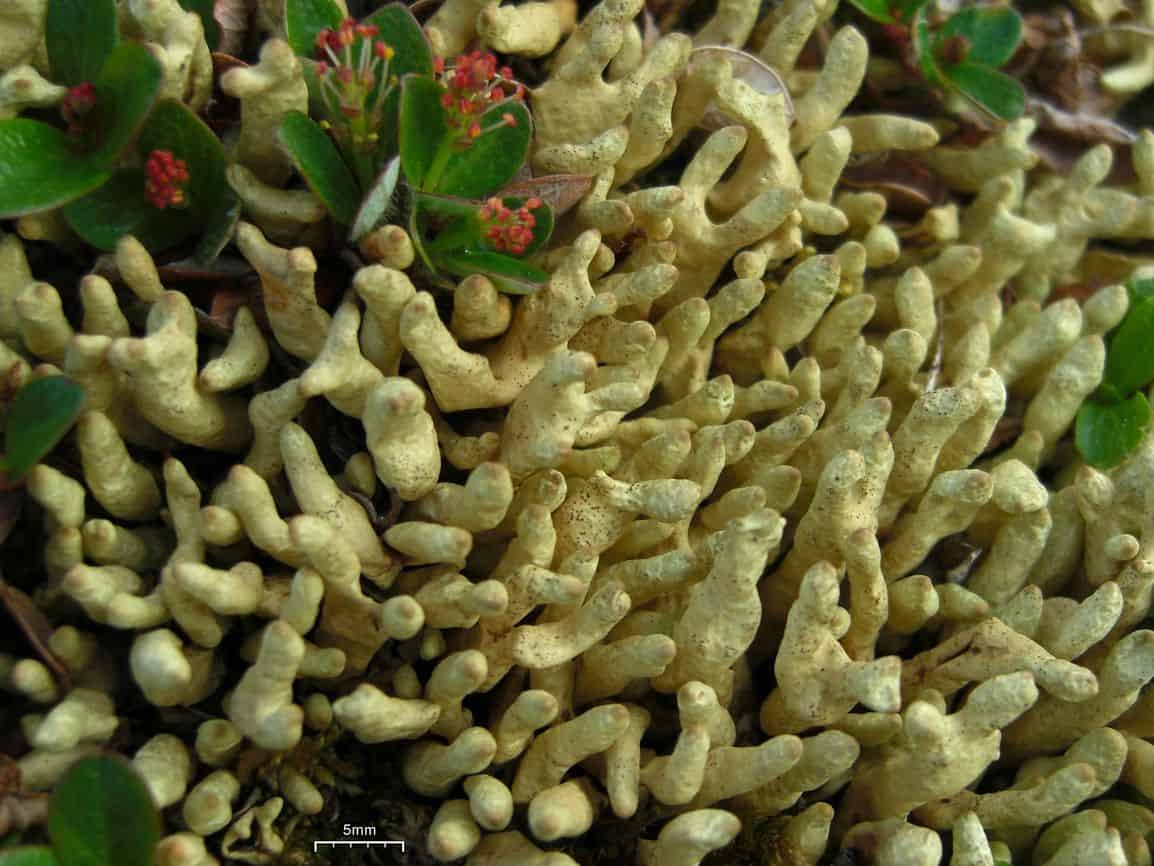 We’ve already seen that lichen are well suited to survive the tough conditions of the tundra. In the parklands of the Western Arctic, a survey has found more than 500 different species.

The Arctic Finger Lichen gets its name from its unusual appearance. It grows in tapering, upright, hollow tubes that look rather like human fingers. It’s also known as Baby’s Fingers and, less pleasantly, as Dead Man’s Fingers.

It’s usually found in areas of tundra where moss also grows, and in locations where the snow melts later in the year. 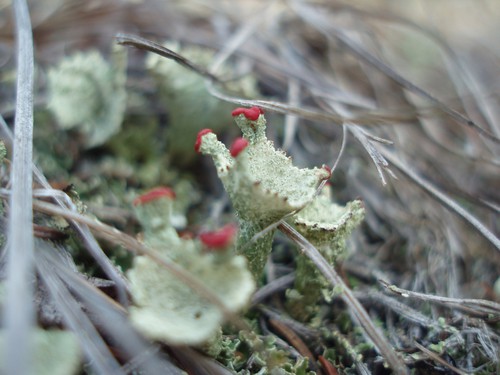 The Boreal Pixie-Cup Lichen is a native of North America, and it takes its name from the small funnel-shaped cups it forms. These are red on a pale green body (or thallus, to give it its technical name).

They’re small fungi, growing to a height of about an inch. There are lots of different kinds of cup lichens, and they’re usually found in rocky areas.

In traditional medicine, they’re boiled with milk or syrup and used as a remedy for chest ailments and whooping cough. 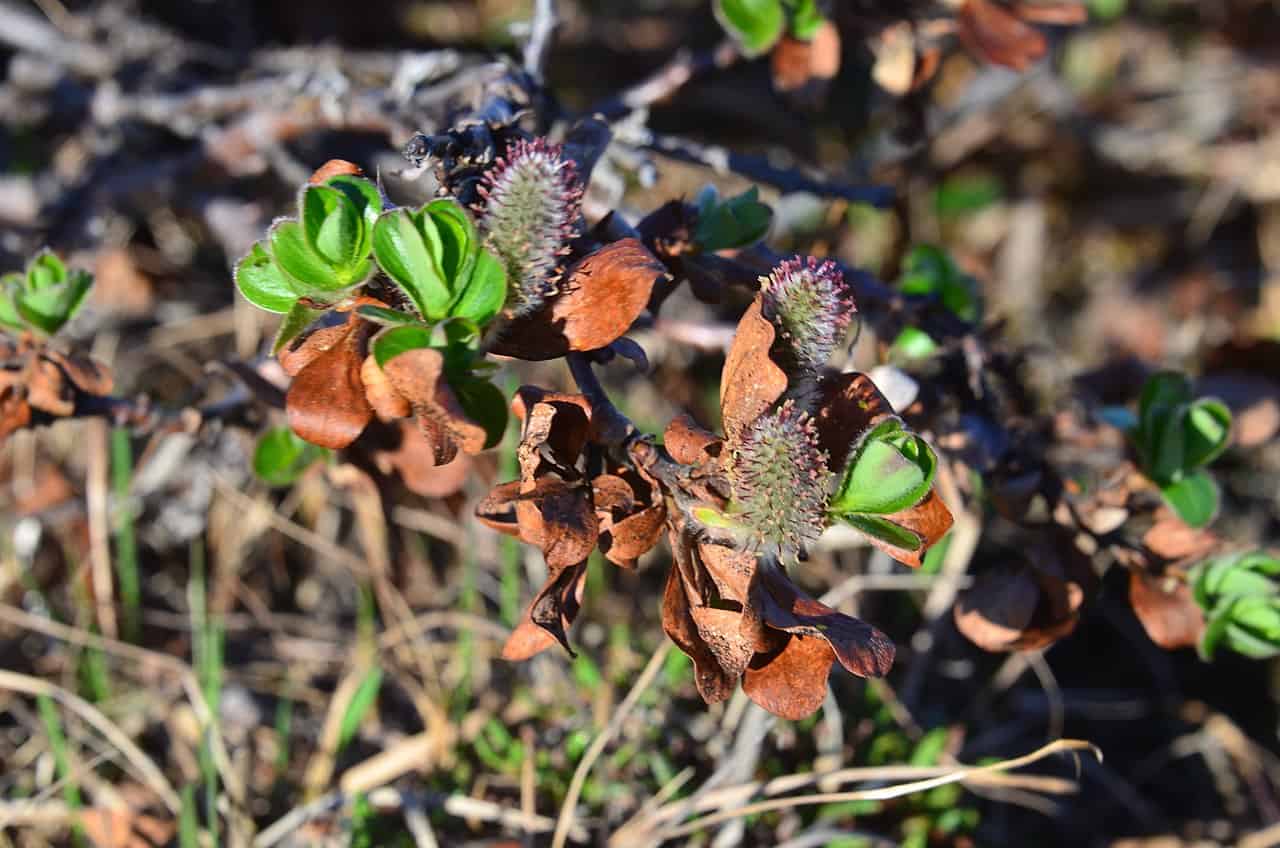 Willows in other parts of the world can be tall, graceful trees. But in the extreme cold and low light of the tundra, the Diamond Leaf Willow is a short, creeping plant. It grows to just a few inches in height and forms a thick carpet across the ground.

It’s a native of North America and can be found in the Yukon, Alaska, Nunavut and the Northwest Territories. And it often grows after a wildfire, bringing the first signs of life back to the scorched earth.

The catkins appear before the leaves, which are hairless, green on top and white underneath.

In the springtime, the young leaves are sweet enough to be eaten by people. They were also used in the past by the Inuit people to make tea and soup. And the people of Nunivak Island chewed them to treat sores and other mouth pain.

The woody stems were put to good use too, woven into baskets, or used to make bows and arrows or animal traps. 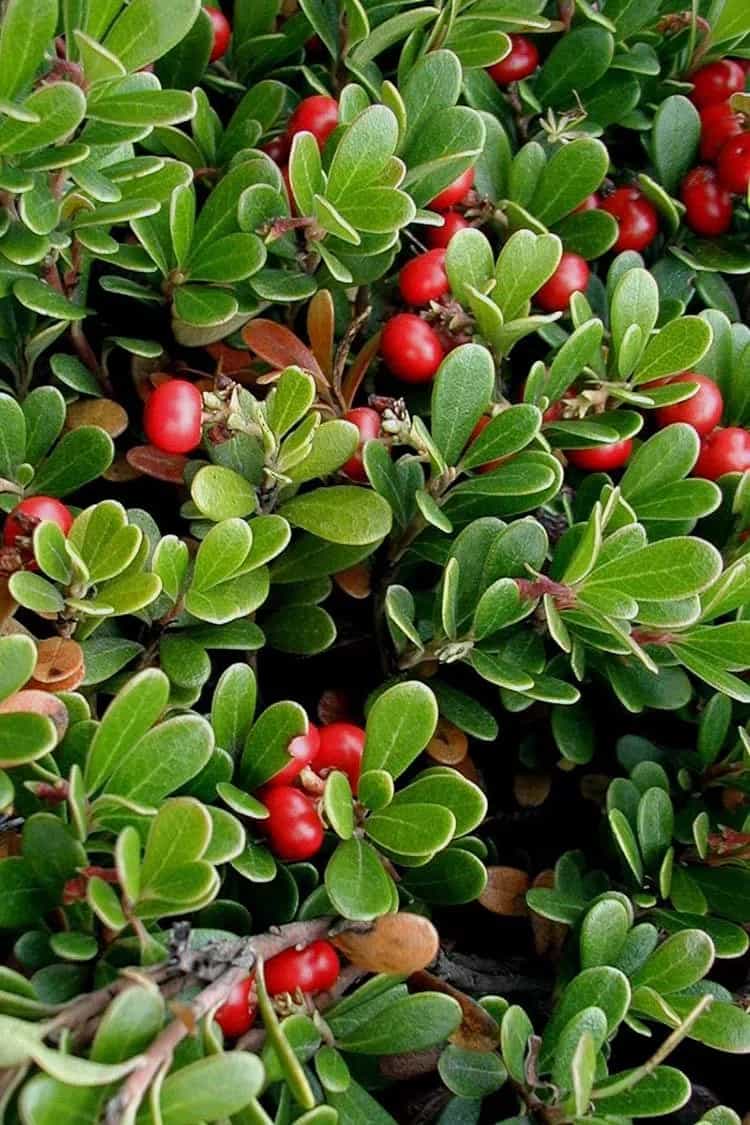 Unlike other plants of the genus Arctostaphylos, the Bearberry has adapted in ways that allow it to survive in the tundra. In fact, it’s an amazingly versatile plant, and can also grow in sand and on gravel.

There are three different varieties: the Alpine bearberry, Red bearberry and Common bearberry. All are evergreen and grow as shrubs with a rounded habit.

The small red berries appear late in the year. They’re a favorite food of bears, hence the name. But they can also be eaten raw by humans.

And the leaves are used in traditional medicine, primarily to treat bladder or urinary tract infections. Some herbal practitioners also credit them with promoting wound healing and gastro-intestinal health. 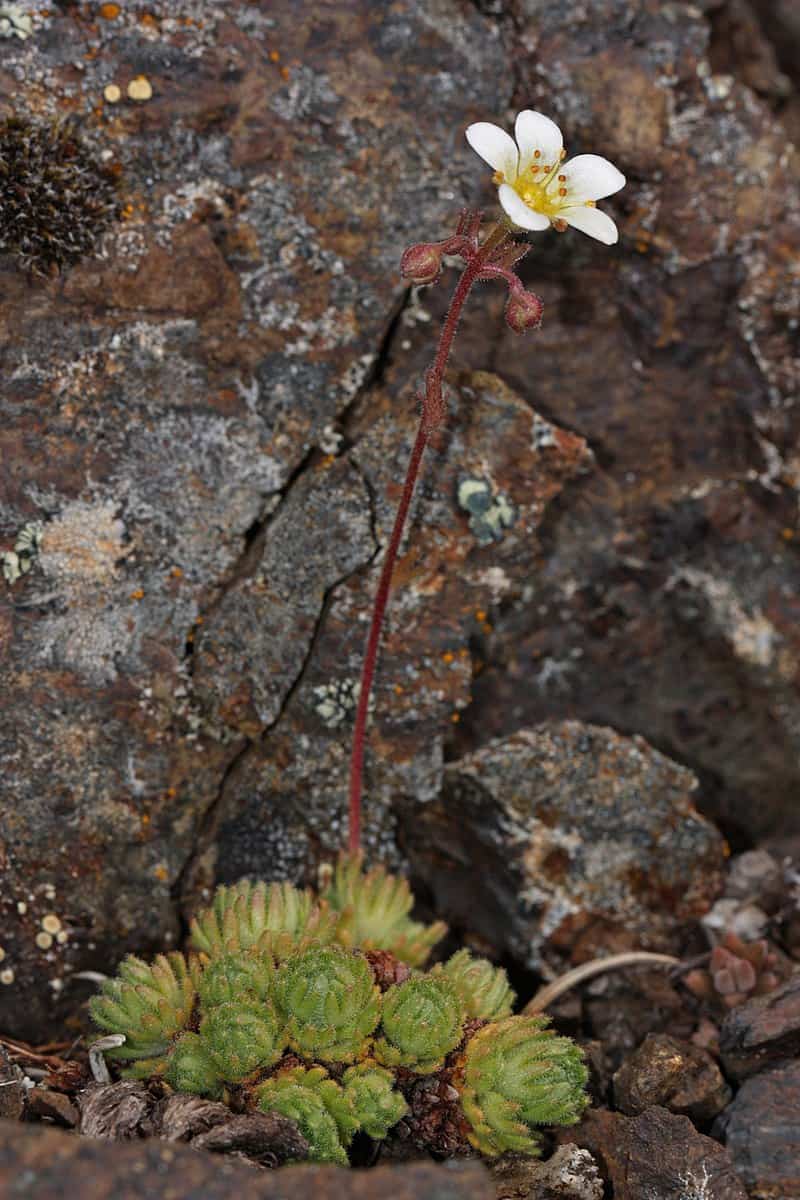 Tufted Saxifrage is found in the freezing climate of northern Lapland, as well as some areas further south. It grows in tight clumps that blanket the ground, reducing evaporation and providing shelter from harsh winds and frosts.

It doesn’t need insects to pollinate. Instead, the stamens bend over the stigmas, so that any breeze shakes the pollen onto them.

It grows to a height of between two inches, with small flowers that can be white, red or yellowish. The leaves are lobed and light green, sometimes with a red tinge. And they’re covered in hairs, providing insulation. It also produces small fruits, packed with seeds.

The name “Saxifrage” comes from the Latin and means “rock breaker”. It reflects the plants’ habit of growing on rocky outcrops, appearing to burst through the stone. In the past, this perceived talent saw it used as a treatment for gallstones. 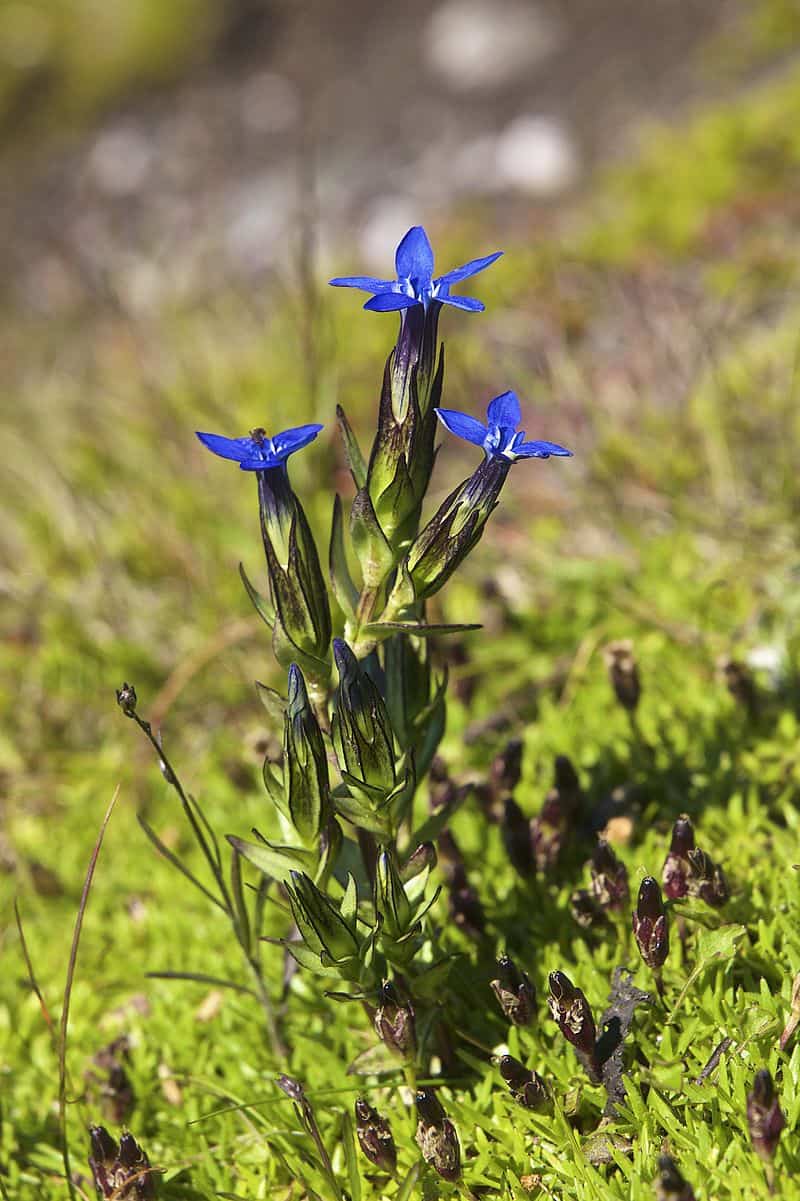 The Snow Gentian is a small, apparently delicate plant with a bright blue flower. But appearances can be deceptive. This resilient gentian can cope with the harsh conditions of the fell tundra heaths. It can also be found on meadows, shores and the banks of streams.

Each plant grows to a height of between 2 and 8 inches, and produces one solitary flower in July or August. The leaves grow opposite one another and are attached directly to the stem without stalks.

It can self-pollinate when there’s no alternative. But the deep ultramarine flowers are designed to attract pollinating insects. The petals open in the sun and close as soon as it’s overcast to conserve heat.

The plant takes its name from Gentius, a king of Illyria in the Western Balkans. It was he who was believed to have discovered its use as a treatment for alimentary ailments. 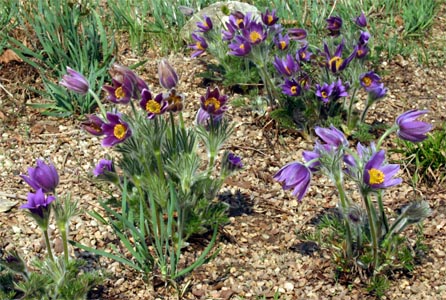 The pretty Pasqueflower grows to a height of between 6 and 8 inches. Staying low to the ground helps it to keep warm and avoid damage from freezing winds.

Each stem is covered in hairs to provide insulation. And each one carries a single flower, which can vary in color from deep lavender to almost white. The flower is bell-shaped and, like the stem, it’s covered in insulating hairs.

The Pasqueflower is a common sight on the southward facing tundra slopes of northern Alaska and the north western United States. And it’s also a popular garden plant.

It can cause allergic reactions, and it’s toxic to both animals and humans. It’s nevertheless been used in traditional medicine as a sedative, painkiller and a remedy for eye conditions like cataracts. 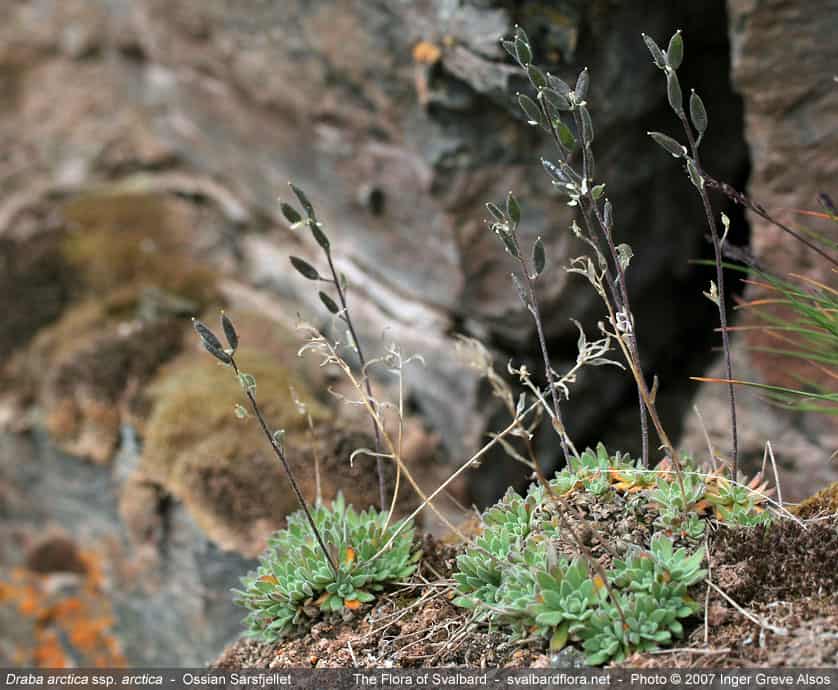 The resilient draba has many varieties, a number of which can grow in the unforgiving climate of the tundra. The Arctic draba, also known as Arctic Whitlowgrass, is one of the toughest.

It can grow to a height of between 2 and 6 inches. It has simple green leaves arranged in rosettes, and white flowers that appear in June and July.

It’s common in the middle and northern arctic tundra zones, and found in Norway, Greenland and Northeast Canada. It prefers gritty or sandy soil, and limestone outcrops where it can catch the sun.

That brings us to the end of our look at the range of different types of plants in the tundra. These small survivors have adapted to handle some of the world’s most inhospitable environments.

They are crucial parts of the ecosystem, providing valuable food for wildlife. And they remind us that even in the coldest, harshest places, life can – and does – find a way.